Maurice Campaign - kick-off and game one The Battle of Wevelgem 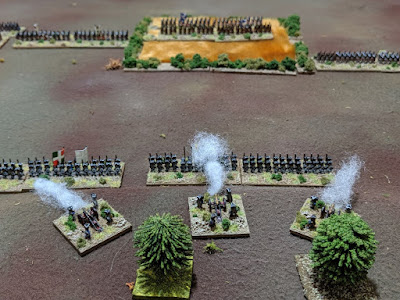 Wednesday saw myself and Drew kick off a War of the Spanish Succession campaign using the Maurice rules. We've had a few games with the rules now and the campaign system looks rather good, although is geared for more than two players.

Drew picked a French force with some Bavarian infantry, based around a core of elite horse with the Cavaliers national advantage, my Allied force was much more of a mish-mash of Dutch, English, Scottish, Swiss, Danes and Hessians under a common banner, I took the 'Rally to the Colours' and 'Depot Battalions' national advantages.

Our first game would be the Battle of Wevelgem a village near the border of Picardie as the Allies attempted to drive the French back behind their forts.


The battle would be fought on rugged terrain and although neither side had any suitable scouts the Dutch easily won the scouting roll and elected to attack.

The Dutch placed three pieces of terrain choosing two low hills and a village while the French also chose two low hills and village and completed the layout with a ploughed field in the center of the table. The hills don't show up too well in the photos as they are under the cloth, so we decorated them with a few trees and in one case a windmill.

The Dutch commander chose a unit of Wurtemburg cavalry for his mercenaries.

The French deployed their infantry out front supported by their guns and held their cavalry in a refused position to their centre left.  The Dutch had a solid center of infantry with horse on each flank, their guns were deployed to support the right of the infantry attack and the cavalry on that flank. 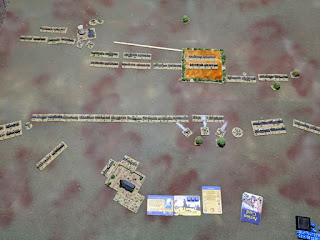 The Dutch began with a general advance throwing forwards their infantry and guns supported by the horse on their right, their horse on the left remained passive for now. The French took the opportunity to reinforce their hand and resulted to passing or bombardments for the initial few turns.

The French then committed their horse to their left to hopefully stem the Dutch advance, outclassed, the Dutch horse on that flank halted just out of range and their guns were deployed to try to disrupt the elite French horse, the Dutch infantry continued their relentless advance although the large field in the centre soon made that much harder to coordinate.

Le Compte de Frou Frou continued with his bombardment of the Dutch advance and soon the first casualties of the day were taken when Dalrymples battalion of Scotsmen in Dutch service, already disrupted by their passage through the corn fields were broken by gunfire!

Death of a Hero played on the French soon saw the honours even though.

To try to break up the threat on my right I played a Confusion on the advancing French horse and although it held them up slightly Drew soon played a Coordinated to get them back into formation, my plans were foiled!

The Dutch infantry were now in musket range of the French and I prevented the initial French volley by playing 'Firefight' to prevent it.

With the French cavalry advancing on my right it was time to start softening up with my guns and I'd been holding on to a 'Well Laid Guns', so duly tore into them and missed with both barrels - bah humbug!

Drew countered with a Confusion of his own drawing my Nassau Saarsbrucken horse out into a trap. I really needed to Rally my foot for the onslaught in the center was going my way but I should make use of my 'Rally to the Colours' to force the advantage.


In the eventuality the Nassau Saarsbrucken horse did not do so badly and were able to regroup and rally from the outnumbering thunderous charge of the French horse.

The infantry slog had evened out somewhat and the lines were thinning alarmingly, although the French were only at Army Morale 3 and I was still at Army Morale 5.


The French horse charged in again destroying my Nassau Saarsbrucken horse, but 'The Death of a Hero' combined with wiping out his elite Regt. Crussol foot saw the French morale break and the Dutch gain a Marginal Victory.

Unfortunately, we were unsuccessful in our pursuit and only earned two Epic Points for the battle while the French gained one.


Having lost six units in the game my 'Depot Battalions' really paid off as three of them, including the valiant Nassau Saarsbrucken were rebuilt at Trained status rather than dropping to Conscripts. Also Hays Dragoons were promoted to Trained status. The Nassau Usingen and Dalrymple foot were reformed at Conscript status.

Although I had only earned two Epic Points, Michael von Pfanenstein joined my forces.


Having been destroyed the French elite Regt. Normandie were replaced by Conscripts, although the fates were good to the French with both the I/Champagne and Bourbonaisse foot being promoted to Elite status.