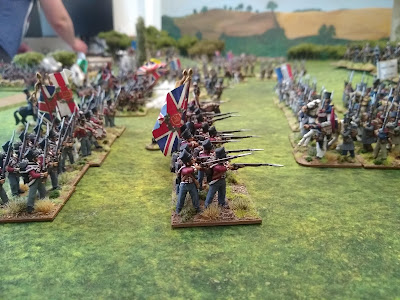 Saturday gave me the opportunity to get part of the ever growing Napoleonic collection out on the table and invite Tom and Martin over for a game of General d'Armee. 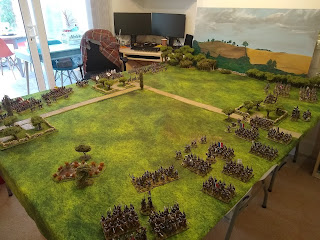 I picked a couple of roughly equal forces each of four brigades, three infantry and a cavalry and laid out a table that was fairly open with a couple of rolling hills and some walled orchards. Victoria has painted me a backdrop so the rolling hills continue off into the distance. 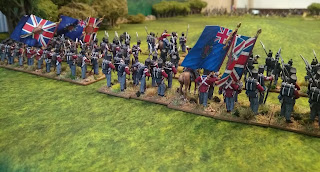 The British had nine battalions of British/KGL line and four battalions of Hanoverian recruits backed up by a battery of KGL artillery and a brigade of three Light Dragoon regiments. 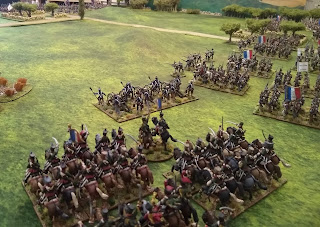 The French had twelve battalions of line, two batteries of guns, two regiments of Chasseurs and a regiment of Veteran Hussars.

Tom took the French, while Martin commanded the British, as it was their first game I played a GM roll, offering - hopefully good - advice to both players.

Some shots of the action.

In the end we ran out of time and called a winning draw to the French, their cavalry were about to make an impact on the British right that may have had a deciding effect on the battle.
Given it was Tom and Martins first game with the rules I think that the game ran well with some good friction at key moments.

If he was not on his holidays James would have come along too, I think he would have enjoyed some of the "Charge them in the face!" action on display today, although future games may get a bit more tactical ;)

Oh, and the newly painted KGL chaps seen at the back here, did not fire a shot nor did they take a casualty, so that's a result for them and they can get properly committed in the next battle. 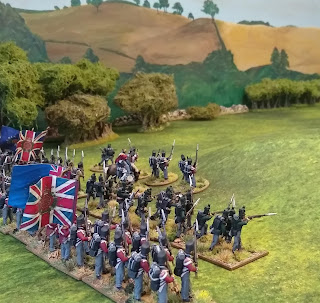