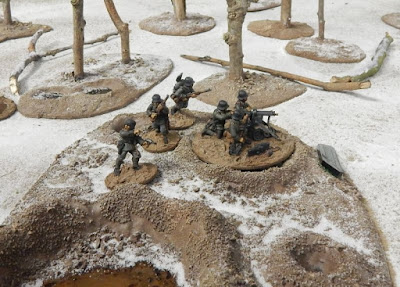 It's been quite some time since the last installment of the campaign, indeed since that time we have actually visited the battlefield.

Yesterday evening James and I traveled to the Burton and District Wargames to play Peter and Simon again taking in the next game in the campaign.

Leutnant Schmidt and his Stosstruppen have been forging ahead so far, brushing aside all who stand in the way and capturing poor Leiutenant Robin in the last game. Schmidt is seen as a leading light his Colonels opinion of him is at +3 giving +1 on Force Support while his mens opinion is at +2 o bonus yet). He has also been awarded the Iron Cross First Class for his bravery and leadership in the taking of the S7 strongpoint. 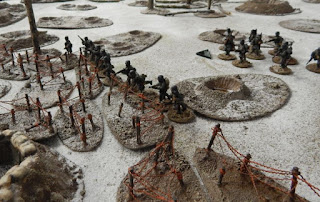 The Chasseurs have rushed more reinforcements to blunt the attack and now at midday on the 22nd February 1916 Capitain Seguin is tasked with manning the line of entrenchments and stemming the tide of the German assault.

This time we would be playing an Attack and Defend scenario.  Rolling for Force Support the Germans would have 12 points while the French had 7. James and Peter would play the French and spent their support on a Hotchkiss and 24" of barbed wire, Simon and I purchased an Adjutant, a MG08 machine-gun and eight barrage components, pre-game, feurwaltz, gas (to simulate the intensity) and five phases of in-game barrage.

After we played out the Patrol phase the table looked like this, French jump-offs in blue. 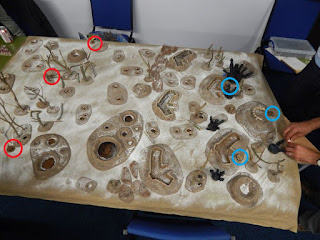 The French had rolled a higher force Morale and would be starting on a 10 while we started on a 9.

The in-game barrage continuation was placed on the upper most French jump-off shown in the above photo and with the middle one being within 18" also denied the use of that one for five phases too.

The French took the first phase and did not do anything, waiting to see what developed. A unit of Stosstruppen were soon deployed at the uppermost German jump-off and advancing two wards the  wire. The French continued passive so the Stosstruppen broke into a run and then crawled on all fours up to the wire before the barrage lifted. 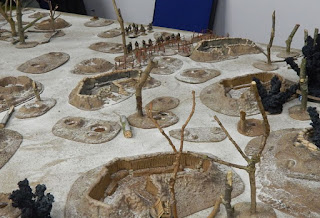 Still no Frenchmen made a show so the MG08 was deployed at the lower most jump-off and placed to cover the advance while a  smaller section of Stosstruppen advanced behind their comrades. With the storm troopers on the wire the shells ceased to fall and the Chasseurs started to emerge although without any great enthusiasm. One section manned the dugout at the bottom of the plan but the Hotchkiss crew could not be tempted from their dugout. 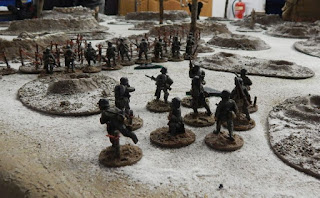 Crawling on their bellies the storm troopers tried to make a breach in the wire but were unsuccessful and the Hotchkiss was tempted into action and started a steady but ineffectual fire. The MG08 sprang into life and soon two Chasseurs manning the Hotchkiss were down.

The French made a breakthrough (threw three sixes!) and soon the line sprang to life with rifle and machine-gun fire the MG08 being a prime target. 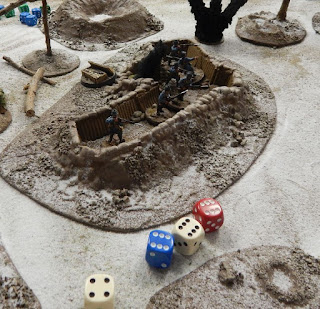 Seeing the need to get the  wire cleared and to continue the attack on the dugouts Leutnant Schmidt lept into action and soon had both sections attacking the wire while the MG08 flayed the French lines with accurate fire (8 hits from ten dice on a 5+!). The wire was eventually cut and seizing the initiative (double 6) Leutnant Schmidt led his troops into the first unmanned dugout where pausing for breath he then ordered a barrage of grenades launched them at the first line of trenches.

The Hotchkiss concentrated its fire on the MG08 and the crew soon broke for the rear with a wounded NCO.

Unfortunately the grenades had not had the desired effect and the first attack was repulsed and Schmidt slightly wounded. Undaunted he again threw the second section at the Chasseurs, this time killing them all for only light casualties  among his men, but another wound to himself.

The French were determined not to lose this dugout and emerging from their hidey holes another section charged at the Germans determined to dislodge them, this attack was beaten off but Leutnant Schmidt  was mortally wounded in the fray. 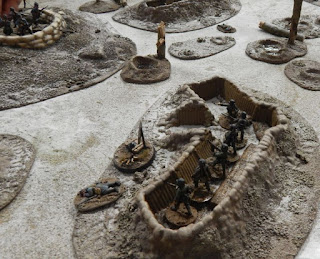 Undaunted the Stosstruppen in the trench turned their accurate rifle fire on the Hotchkiss and all the crew were soon dead, the French had to commit their last section to hold the line.

Due to losses, the French morale was collapsing (they had FM1) and due to the broken machine-gun and successive wounds to Leutnant Schmidt the German one was not much healthier (FM3) but the Chasseurs now had a stroke of luck. The Germans threw their four command dice and up came three sixes, the turn ended and the MG08 routed from the table taking their wounded NCO with them, the Germans were now on FM2 and neither player could win the game, a dishonourable draw! 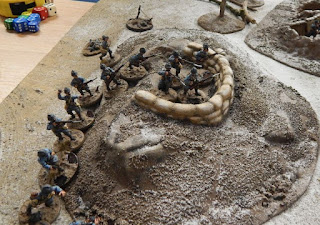 We did not get to do the campaign phase and will roll for that later, but, the Germans lost Schmidt and 10 Stosstrupppen were casualties while the Chasseurs lost a Caporal and 14 Chasseurs were casualties. 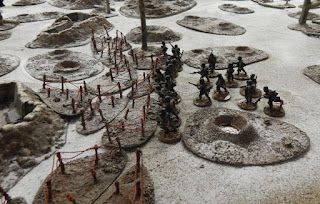 Posted by Paul Scrivens-Smith at 13:48