It has been rather a busy week, hence no blog updates. However, I did manage to fit in two Warhammer Ancient Battles games in preparation for my campaign day this weekend. 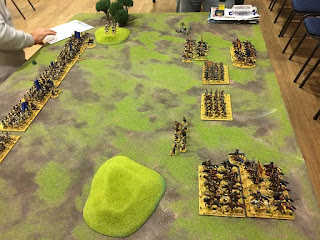 Richard will be borrowing my Almoravids for the event and he has only played one game of Warhammer Ancients previously so we picked an army for him to use and he got to play against my Spanish on Tuesday. 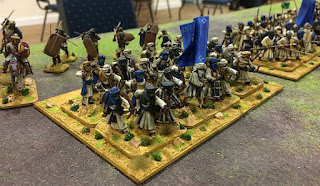 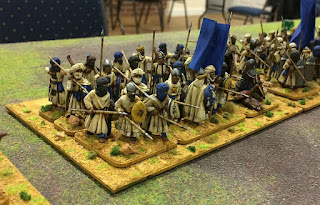 It was an absolute whitewash to the Berbers. The Christian Knights were unable to make any headways, even the Generals unit after some initial push-backs was routed never to return. The Berbers had lost the Sayyid and no other complete units!

Next up was a Thursday evening game with chum Tom who I don't get to play nearly often enough. So after meeting the chaps at the Rose and Crown we made our way to Lenton Business Park where we would be gaming for the first time in the panelled chambers of the board room.

Tom had only bought 1600pts of his Almoravids with him, so the easy option was to use again the army that Richard had used on Tuesday. 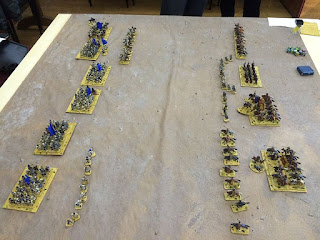 This fared much better from the off, screening my troops with skirmishers the lines closed. Initial combat was initiated with the Berber cavalry who led by the fearsome Sayyid battled away for several turns with the Caballeros until in one fell swoop six Berbers were killed in one round of combat and they broke causing the Emirs unit to also panic and flee!

It did not go all the way of the Christians though. In the centre my unit of Hildagos led by the Infante charged home on a unit of Berber foot, completely fluffed their combat, failed their break-test and only fled 5" being run-down in the process - bugger! 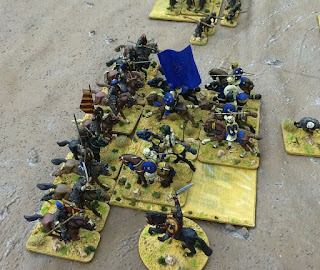 The Emir nearly fled off table when charged again by the victorious Caballeros but just stayed on and the unit was rallied but were there after not able to influence the outcome.

The Rey's unit fought very well, having become embroiled in a protracted combat with some Berber foot foot were charged in the flank by another big Berber spear unit. In the ensuing round many Berber casualties were inflicted and both units broken taking much of the Berber army with them, although the Spanish were in no fit state to follow up. 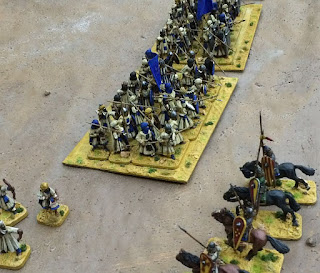 At the end of the battle points were totalled and it was a solid draw, the best results I have had with the Christian Spanish for a long time!

As you can see, the terrain was a bit featureless in this game as I had forgotten to pack any! 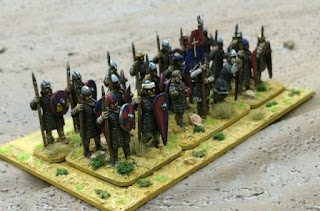 Posted by Paul Scrivens-Smith at 01:08