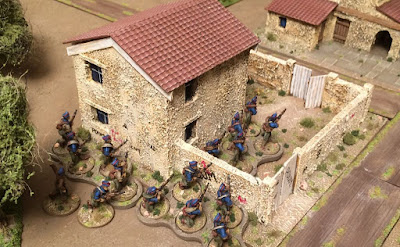 Thursday evening at the Rose and  Crown saw Matt, Mark and myself engaging in a little Chain of Command: Espana.

For a change we would play an engagement from the first days of the conflict where loyal members of the Guardia Civil engage a centuria of Falanage. Matt wanted to use a regular force and took the Regular option with 4 command dice, so myself and Mark spent our seven Force Support points on a pair of Centuria Leaders to make our Jefe and Sub-jefe up to Senior Leaders, a light machine-gun and to make the entire force Cara Al Sol. 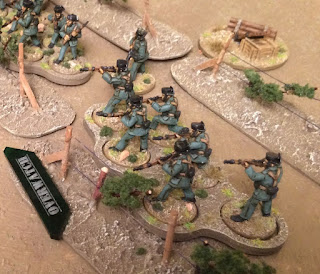 The first roll of the game for Force Morale made the Cara Al Sol irrelevant, the Guardia Civil rolled a 2 and we rolled a 6 so would be starting on Force Morales 8 and 11 respectively. 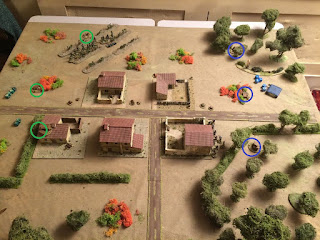 Force Support was rolled and we both had a massive 1 point to spend the Guardia Civil purchased an Adjutant while the Falangista went for 'El Hombre' and it would have been very useful if we had actually remembered to use it at all during the game!

With the higher Force Morale the Falange started the game and with a double six to boot! A section of Falangista were soon making their way to the nearest building while the HQ runners started a wide scouting manouver to our left. 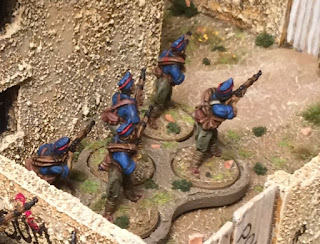 The Guardia elected to see what developed before deploying any troops and another phase soon saw the Falange occupying the substantial two-storey building.

Undaunted by this the Guardia deployed a section and cautiously advanced towards the house under desultory rifle fire from the top floor windows. If we would have known we would have occupied it so easily we would have put the LMG-armed section in there! 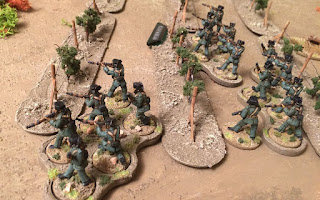 Meanwhile on our right the second section of Guardia deployed from the vineyard and started an unopposed advance up that flank. After a couple of double phases our jump-off on that side was looking shakey so we threw out the section of Falange with LMG and put them under, to be said, some pretty poor fire!

It was all beginning to kick off on the left though, the Sub-Jefe and a team of Falange were still in the walled compound and preceded by a barrage of tear-gas the Guardia charged in and put them all to the bayonet. 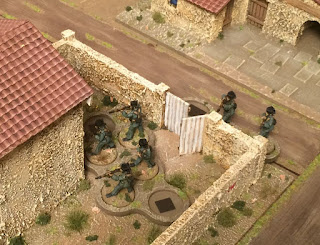 However, the scouts on the left supported by fire from the windows saw off the remainder of those Guardia. Who consolidated the rest of the section and launched an attack on the building, first succeeding in forcing the team on the ground floor up the stairs to join their comrades. The HQ runners were unable to assist this time.

Meanwhile, on our right the machine-gun fire from the edge of the woods was starting to tell on the Guardia caught in the open there, but another double phase saw the tear-gas cannisters thrown, the shocked troops rallied and another bayonet charge launched, scattering the Falangista to the rear. 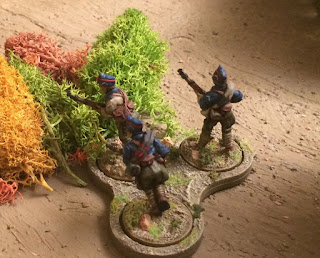 It was getting towards the end game now, the Guardia were reduced to Force Morale 3 while we were still on a fairly respectable 5. Matt staked it all on removing the Falange on the upper floor of the house. The Teniente gathered his remaining men and led them up the stairs, the initial combat was a draw so we fought again. Most of the Falange were wiped out while all of the Guardia and their Teniente fell. The Guardia morale collapsed and we had a rare victory for the Falange.

All the images were taken during the game with the terrain and figures from my own collection.

Posted by Paul Scrivens-Smith at 11:24