Our Longstreet campaign has reached 1863 and the first US Colored Troops are starting to make an appearance, as neither Drew nor myself had more than a handful of coloured troops painted it was time to rectify that situation.

Fortunately, I had a box of Perry Miniatures American Civil War Union Infantry in sack coats skirmishing and 2/3 of a pack of their black Union heads that Drew had shared with me.

It's quite a simple conversion to swap the heads, the old head is snipped off with wire cutters, a pilot hole drilled with a pin vise and then enlarged with a Dremmel, the new head is then super-glued in. Some of them are a bit of a rough fit, but I found fixing them with paint easier than using superglue. 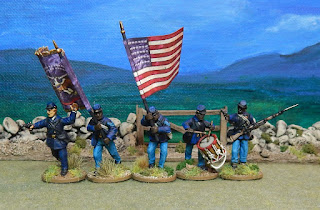 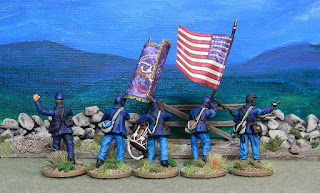 The officer in the command group is the only unconverted one, I do like the sergeant with pistol one, I think he came out rather nicely. The flags as usual are from www.warflag.com

I probably painted a few too many with non-regulation canvas haversacks, but don't think I'll be going back to fix that any time soon, or indeed ever. 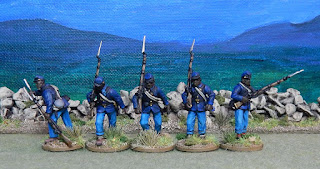 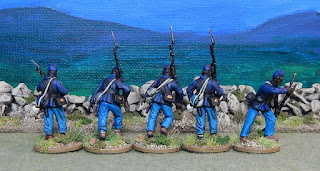 The colours used are the same as my standard mix, with the flesh being done from a basecoat of VMC Chocolate Brown.

I thought I'd share the low tech photography setup I use; it's our breakfast bar, a Daylight lamp and the camera sits on a 'pod' which is basically a beanbag with a screw fit for the camera. 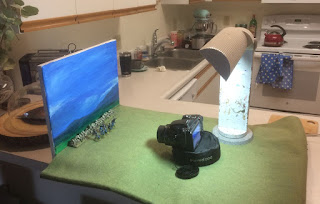 I've also entered these over at the Analogue Hobbies Painting Challenge here, I'm now tantalisingly close to my 1000pt target.

Posted by Paul Scrivens-Smith at 16:40