Longstreet Campaign - The Battle in the Wilderness 27th of August 1863 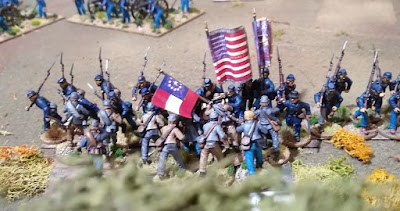 After a couple of missed weeks Drew and I resumed our Longstreet campaign on Thursday evening with the last campaign game of 1863.

Rolling for the scenario we would again be playing the The Hilltop, despite the Union forces having Broken Codes for this game the Confederate Scout came good for a rare occasion and Whippa would be defending.

The terrain rolls came up woodland after woodland and soon the bare heights were edge to edge in trees. 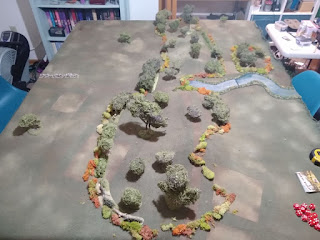 Major General Gerald P. Whippam (EP:25) is a 31 year old Floridian and is already a Veteran of the Indian Wars and is accompanied by his personal Scout who's reliably provided the best ground to make a stand in earlier engagements. At the Battle of Battle of Keller's Heights Doctor Thaddeus Marle joined the force as Whippam's Personal Physician. His cool handling of the artillery at the Battle of New Glarus Turnpike in 1863 gavee Gerald useful insight as an Artillery Officer 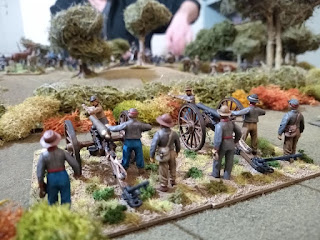 Brigadier General Elias Rogers (EP:13) is a 31 year old graduate of West Point and had made a career as an Artillery Officer in the United States army. He is a Leading Abolitionist and is steadfast in the cause. The Irish Catholic Fire and Brimstone Preacher Father Seamus O'Riordan has seen fit to attach himself to Colonel Rogers staff.


The Union forces start this battle with a Broken Code 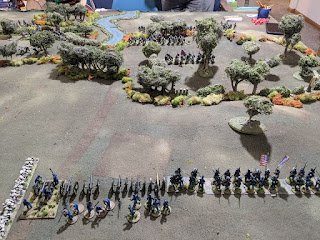 I was particularly happy to be the defender and to have the objectives so masked by woodland, I could at least try to shield myself from the massive Union artillery park that was arrayed against me.

The forces were deployed and we poured beers, grabbed some gaming snacks and had at it. 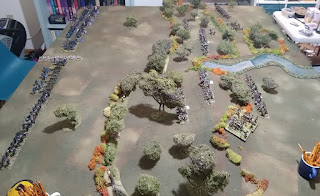 The Union had gone strong on my right where I only had one infantry regiment supported by the horse defending, so I started to push more troops towards that flank. On my left I advanced through the woodland, but, staying clear of the edge.

I did rather get to close though and a "Confusion" card pulled the 5GA to the edge of the wood where they were pounded with a "Point Blank" fortunately Drew threw some terrible dice and they only lost a couple of bases. 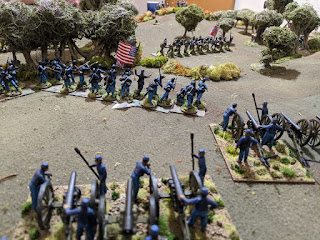 On my left things were going better for the 2/8SC whose Sharpshooters were tearing ragged holes in the recruits of the 103PA, they marched on the field with 600 men and at the end of the day only 120 were left holding the line.

The hammer blow was about to fall on my right, beyond the judicious playing of "Trackless", "Confusion" and "Poor Surveying" there was little I could do to hold up the mass of Union troops heading towards my line. 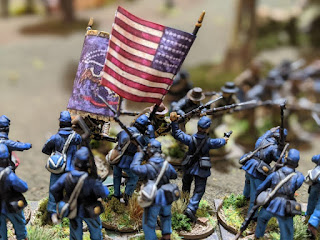 The first charge, led by the 55MA struck home, but some most excellent dice rolling saw that beaten off and followed up with a Confederate counter-charge that in most places caused the Union line to fall back in some disarray.

Both sides were perilously close to breaking and the first test by the Confederates saw the Union stay in the game and launch another charge of their own, throwing well over half their troops into a vicious hand to hand melee. 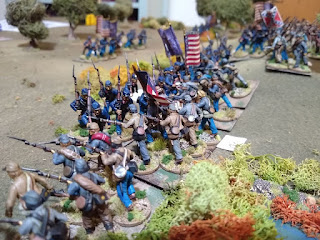 This time the outcomes were about even, with both sides having units retire from the scrap, by this stage the Union force had lost 18 bases and the Confederates 17. But as it was the Union turn it was their time to test for victory and with a break point of 21 it was an even roll.

Drew threw a four and there it was a close fought bloody victory to the Union again! 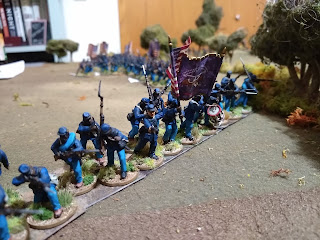 This battle saw the end of some units that had been with us since 1861 with the remnants of both the 20th Maine and 39th Ohio being sent to form cadres of new units. The 55th Massachusetts performed well in the field only to be decimated by a typhoid outbreak in camp! 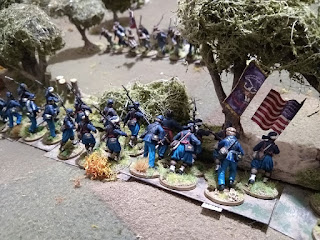 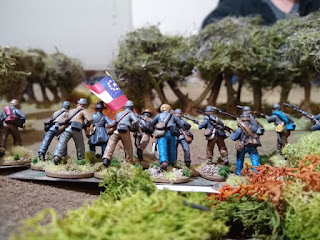 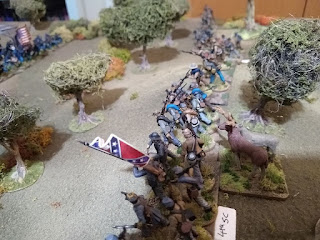 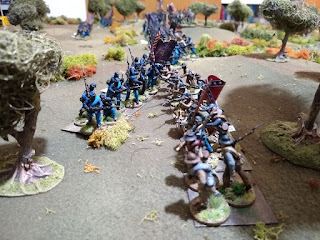 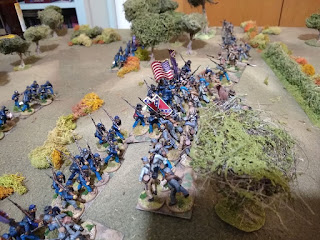