Agincourt 1415 for Partizan in the Cloud #Partizaninthecloud 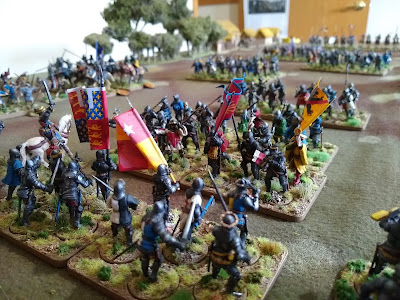 My travel plans to the UK this year have been scuppered and I was sad not to be able to attend the Partizan show. But all is not lost I can participate in Partizan in the Cloud #Partizaninthecloud

Here is a Youtube video of a game that I set up and played earlier this week for the show.


The two forces used were as follows.

Charles, Duke of Orléans - Attached General (Heroic)
Two units of  Later Knights on foot
One unit of Sergeants
One unit of Levy Crossbowmen

Special rules:
Great leaders are a sort of special senior attached general.  A great leader's exceptional qualities enable him to play two replacement activation cards or to-hit cards in a single turn, rather than the usual one. Great leaders are also exceptional warriors and when wounded, play two injury cards and pick the lowest.

And, if you are not bored already, I also created a short video of me setting up the table in our spare bedroom.