More work on the Napoleonic French this weekend with a couple of groups of Light Infantry Voltigeurs from Perry Miniatures.

A trawl through the lead pile turned up enough figures for twelve Voltigeurs and another six Carabiniers for a later post. 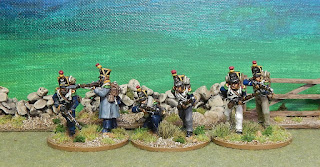 As they are from a light infantry battalion they are in a darker blue uniform than I usually use for the French.

These are lovely figures, but they, like many Perry white metal castings, are a bit of a bugger to clean up and during the many stages of my painting process I'm still finding gobs of metal that need trimming off the castings.

I reckon that the parent unit (the 13e Régiment de Légère) I initially intended these for were painted at least ten years ago, they certainly were painted predating me starting this blog.

It's unlikely that I'll be playing any "Big Battle" Napoleonics in the foreseeable future, but these will make a good couple of groups for any Sharpe Practice games we can get in.

Back at the end of April I placed an order for a load more infantry and bases with Arcane Scenery, twelve days later it was here in Wisconsin with me, great work from Arcane, Royal Mail and USPS. 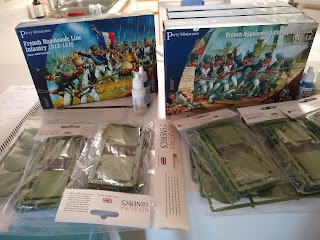 Posted by Paul Scrivens-Smith at 12:30