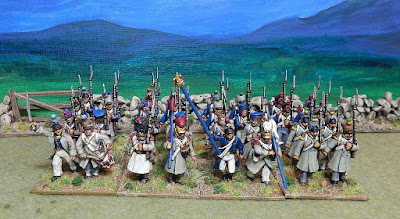 The plastics had been trimmed from their frames and thrown in the box while the command pack looked to have been unopened. 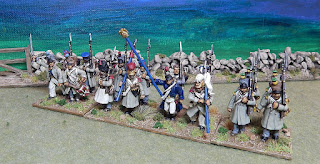 My existing forces are in units of 24 and there was enough stuff to do two units at 2/3 strength, the first one is in greatcoats with the figures from the command pack added. 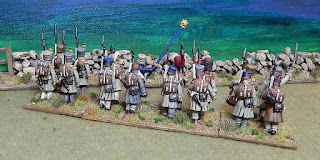 The second are in their jackets so a little more colourful. I'd forgotten what lovely figures these are and have dropped an order on Arcane Scenery for a few more boxes to allow me to bring these two up to strength and to add a few more units to the collection.

I've also ordered some flags from GMB Designs for them all. Hopefully I'll not lose interest in them before these and the figures arrive from the UK.

The rest of the collection that I started about 11 years ago is still in the UK, if I recall there is already 11 battalions of infantry, five regiments of horse, plus loads of other stuff. I tried to sell it before I moved but it did not go and is still in storage, you can see some pictures of it here. 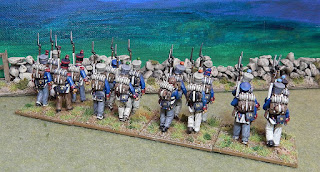 Also in the pile o'shame are some more light infantry Voltigeurs, a box of Hussars and some mounted ADCs so plenty to keep me going and interested. Hopefully the postage will not take too long.

I'll certainly not have enough for some big battle games but I reckon that I'll easily be able to play some Sharpe Practice if the mood takes me.
Posted by Paul Scrivens-Smith at 11:37
Email ThisBlogThis!Share to TwitterShare to FacebookShare to Pinterest
Labels: Napoleonic, Painting, Perry Miniatures