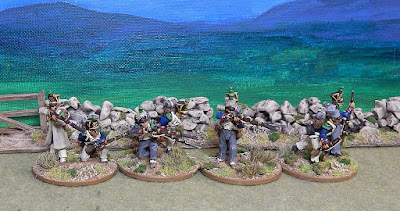 Recently I was perusing chum Toms blog and I noticed that he was painting some Napoleonic French troops. Getting a little jaded with all the 15th Century stuff I knew that I had some Perry Miniatures Napoleonic stuff in my pile o' shame.
Back in circa 2010 I had base-coated these figures and given them a sepia wash, then put them aside. Around 2016 I had put them in a jiffy bag and added them to the other pile o' shame stuff that was coming to Wisconsin with me and they had lain forgotten ever since.

So about 10 years after they were stated I had to tart up the now very scruffy and scratched base-coats then do some highlights and add a base. I think they have come out quite well considering. I'm now working my way through the best part of a box of French infantry that was in the pile o' shame with them.
As the remainder of my Napoleonic collection is back in the UK (and there is quite a bit of it) these are unlikely to get played with any time soon unless we do some small forces for Sharpe Practice or Songs of Drums and Shakos. 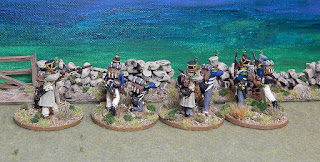