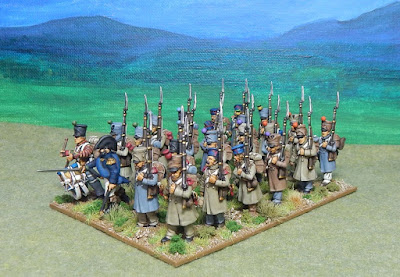 Another week brings another completed battalion of French infantry into the collection. Like the previous unit, all the figures are from the  Perry Miniatures French Napoleonic Infantry set. 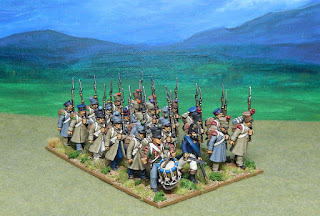 This time all the troops are modeled from the figures in the set in great coats instead of the ones in veste. 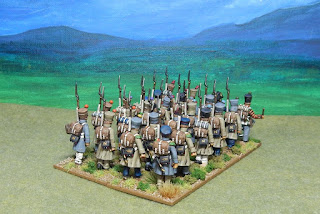 For this batch  I did quite a few head-swaps, it's a simple job of snipping of the existing head with a pair of cutters and replacing with one of the other options in the set to give some variety. There are several replacement shakos, some are in pokalem and there is one bonnet de police in there if you look close enough. 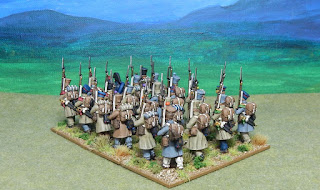 I've used spray-on white primer on the previous troops, but as I planned to have these in greatcoats instead I used a Rustoleum khaki spray on these and left that as a base-coat for many of the great-coats, blanket rolls, shako covers or overall trousers, there are only a couple figures in this batch where I entirely painted over the primer. 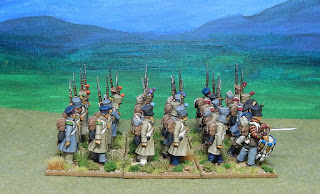 The unit us done as a second battalion from the regiment so there is no Eagle-bearer. 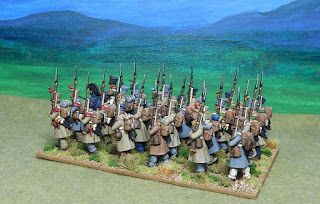 Aly suggested that I do an 'on parade' shot, so here are all the troops completed since the start of May, I'm quite happy with churning out 123 figures this month! Although eight of them were started about ten years ago!

I'm taking a break from infantry this week and plan to add a unit of cavalry to the force over the coming days.
Posted by Paul Scrivens-Smith at 07:40