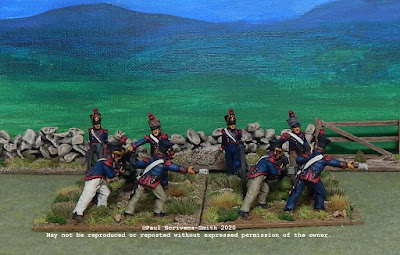 Steady progress on the Napoleonic forces this week with the completion of a battery of artillery, represented by these two pieces. 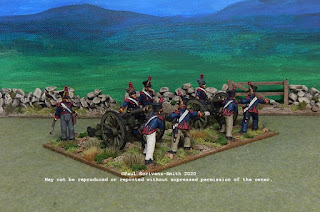 Both guns are six pounders and are the Perry Miniatures Foot Artillery loading 6 pounder model. 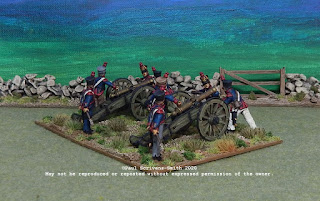 These guns and crews are representing the 19th Company of the 6th Foot Artillery which were attached to the 3rd Division of D'Erlons 1st Corps at Waterloo. 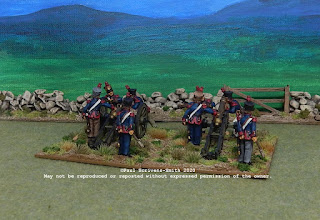 No real change from my paint scheme for these, the jackets are off a base-coat of Dark Prussian Blue, the overalls and shako covers a mix of Khaki, French Horizon Blue, Basalt Grey, Beige Brown with a few overalls in Dark Prussian Blue or Ivory. 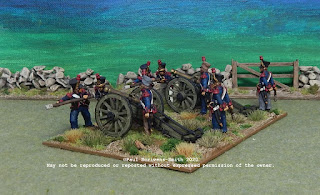 The artillery pieces are base-coated with Russian Uniform WWII. 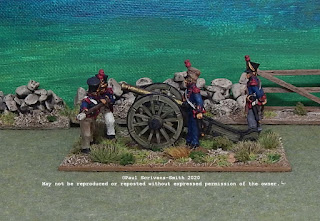 Everything is then washed with Army Painter strong tone and when that is dried the base-coats re-done and then a couple of highlight added. 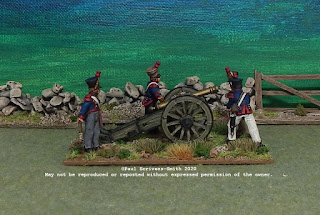 It's not the most efficient painting method, but it does not take too long to do each figure and my knackered old eyes are happy enough with the result. 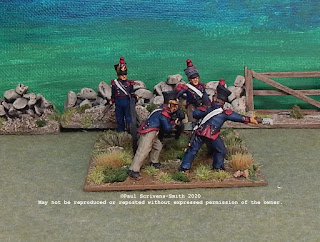 Apologies for anybody who thinks that the copyright notice is rather distracting. One of the sock-puppet accounts on TMP has been taking my content and re-posting it to TMP. Despite multiple requests to stop doing it and delete the post it is still an ongoing problem so I'm putting a copyright notice on the images for now.
If I wanted my work on TMP I would put it there, however I have no desire to support that place.
Hopefully, TMP will disappear into the abyss one of these days and it will no longer be a problem. 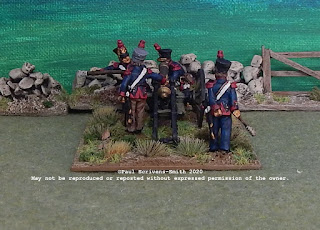 I've now got eight units completed for the French forces, five infantry, two cavalry and these guns and I hope to reach a target of twelve units next month and they will likely be 'game ready' for a 'big battle' game.
Of course they have no opponents so I'll have to make a start on another force before I can play.
Posted by Paul Scrivens-Smith at 07:40