Another blog post and another unit of French added to their forces for the 100 Days campaign. 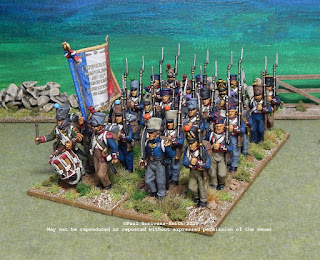 With the exception of the officer in the front rank, all the troops are from the Perry Miniatures French Napoleonic Infantry set. The officer is from the Line Infantry Officers pack and adds a bit of variety. 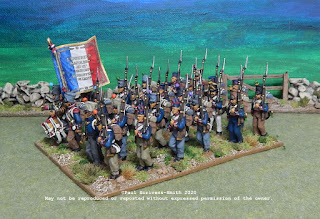 Quite a few of the figures have had head swaps some have different shakos, but, both pokalem and bonnet de police are also used on quite a few. 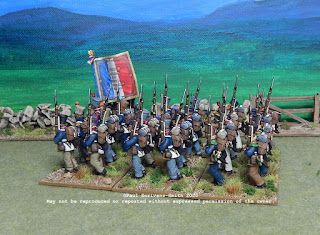 These are the last few of my infantry from the 1812 to 1815 set but once other stuff in the backlog is painted I can see me getting more of these as they are lovely figures, paint up nicely and are a great way to inexpensively build up your forces. I can now field 17 battalions of foot made mainly of these figures. 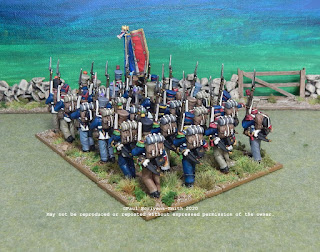 It's took a little longer to paint these than would normally take me to do a unit, but the Wisconsin summer has really kicked in and not only are temperatures hovering around the 30C mark it's damned humid so I'm painting in much shorter sessions than normal. 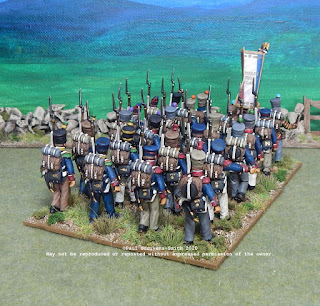 Another effect of the high humidity is that the initial coat of Testors left these a little bit frosted, really only noticeable on the flag, but I was able to recover with a second coat and then a coating of PVA painted onto the standard. 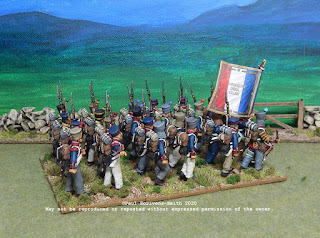 By the way, the standard is from GMB Designs really great flags that add a splash more colour to your units. To avoid the white edge that sometimes is evident I just paint the fringing with a wash of a suitable colour, in this case VMC Gold. 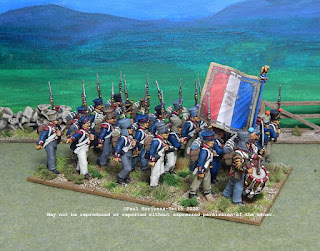 Apologies for anybody who thinks that the copyright notice is rather distracting. One of the sock-puppet accounts on TMP has been taking my content and re-posting it to TMP. Despite multiple requests to stop doing it and delete the post it is still an ongoing problem so I'm putting a copyright notice on the images for now.

If I wanted my work on TMP I would put it there, however I have no desire to support that place.

Hopefully, TMP will disappear into the abyss one of these days and it will no longer be a problem. 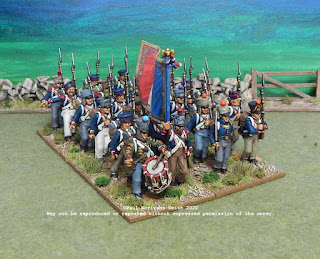 On deck on the painting table now I have a unit of French Chasseurs-à-Cheval, given my usual slowness when painting cavalry and the humid summer, it may be a little while before the next painted unit update. 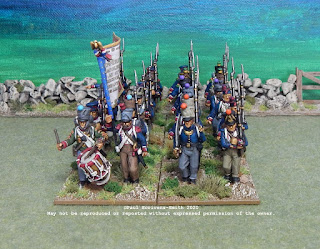 Posted by Paul Scrivens-Smith at 08:27