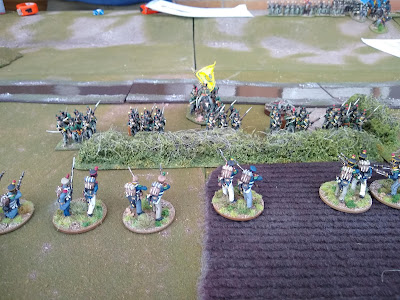 Last Friday I joined up with Nick B, Nick G and Steve at Martyn's to refight Quatre Bras using General d'Armee rules and the scenario in the 1815, The Hundred Days, Scenario Supplement. 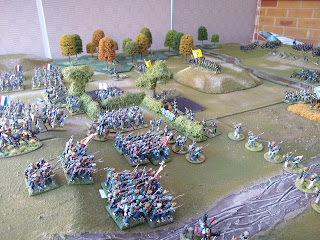 The scenario plays out over 18 turns with initially six brigades of French against two brigades of Anglo-allies but with more Anglo-allies swiftly arriving at the battlefield. If the French can get a crack on then they can clear Germincourt farm and threaten Quatre Bras before the allies can stop them. 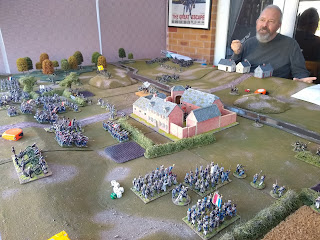 Well it did not go to plan. Steve and I rolled terribly on our early ADC allocations and struggled to get an attack together with many brigades going hesitant, our left wing did not move for two turns and the Brunswickers were swiftly deploying behind the stream line in anticipation. 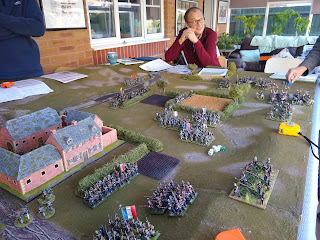 In the centre the Dutch-Belgian conscripts repeatedly threw back the veteran French light infantry tasked with sweeping them aside, I kid you not, every combat the French went in with more dice than the Dutch-Belgians but lost four rounds of combat before finally ejecting the Dutch militia. 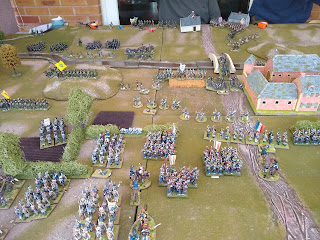 Eventually though Germincourt was cleared, the supports on our left decided to join in and we pushed on towards the stream.
But, the delays had allowed many of the Anglo-allied troops to no only arrive at the battlefield, but also form a solid defensive line. Surprisingly though the French infantry to the right of Germincourt were able to force the stream line and push back Packs brigade. 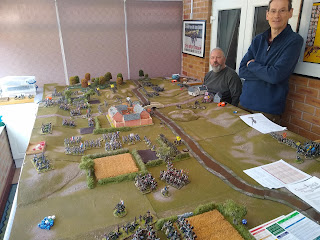 Our heavy cavalry had now arrived, so a brigade each of Cuirassiers, Chevaux Leger and Chasseurs set upon the weaker and less well trained Brunswick and Dutch-Belgian cavalry, looking at the odds, this should have been a overwhelming victory to the French, but the dice rolling seen trying to take Germincourt farm was repeated all over again, every French attack was beaten off and our second wave of fresh troops was still unable the overcome the rallying Dutch-Belgians. 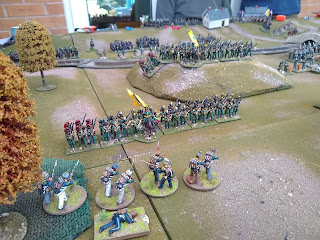 We had to break four of the Anglo-allied brigades or take Quatre Bras to win, we were not even close.
I was so engrossed I forgot to take many pictures at all.
Steve and I may rue our misfortune in the game but it was still a great day spent with great company.
Posted by Paul Scrivens-Smith at 08:22
Email ThisBlogThis!Share to TwitterShare to FacebookShare to Pinterest
Labels: Battle Reports, General d'Armee, Napoleonic