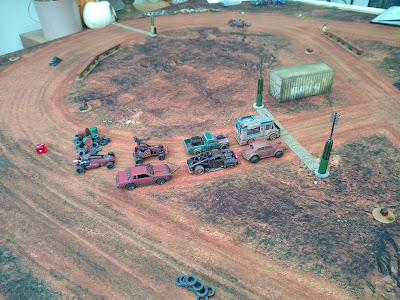 Good morning race fans and welcome to the first Death Race to be held at the Ruddington Raceway.

The cars are lined up on the grid, neither team has yet secured a sponsor, will any of the majors pick these guys up after the race?

With a roar of engines they are off. Martins Ice Cream Truck was first of the grid, completely fluffing his start the truck skids across the track at 90 degrees and carnage ensues as all the drivers try to avoid the mess before them.
Martins car slams into the back of the VW almost totalling it while my car slams into the back of Martins car.
As the Ice cream tries to recover it fails again siding sideways on into storage containers and wipes out!
My VW just edges past the carnage only to get rammed again and slammed into the storage container, third gear phase of the first turn and we have a wreck. My minigun armed buggy attempts to dodge the mess and wipes out itself. one wreck and two wipe-outs in short order.
Martins green car crosses the first gate unscathed and drops smoke into the racing line, I pick up hazard tokens a plenty and soon my harpoon buggy has wiped out, crashes into Martins steady green machine and is wrecked.
Carnage!
I'm now down to one buggy and a car while Martin is pretty much unscathed and cruising ahead.
My Gatling armed buggy is on the tail of the Ice cream van for four phases and something must be wrong with the gun as when I pull out from behind it, the truck has taken on three hits in that time.
Martins two cars are now well out in the lead but Gatling buggy gets on with the job in hand, pedal to the metal he's now in fifth gear and catching up with the leaders who are making steady progress in fourth gear.
The ice cream truck cuts the corner, but Buggy is really going for it, power sliding around corners and swinging the tail out. He's all over the place at times, but in other back in complete control
Feeling the roar of the buggies engine the leader accelerated into fifth gear himself, but spins out and is left facing back up the track in first gear.
Buggy gets behind the second placed car and all those failed minigun rounds of earlier come good and it explodes in a fireball.
But green machine reverses onto the track directly in front of the buggy, a burst of fire from the passengers hand weapons wrecks the buggy and it slams into the truck destroyed.
While my red car and the Ice cream truck duel it out, Green machine takes a stead drive over the line.
That carnage with the truck messing up the first two gear phases really changed the nature of the game, rather than accelerating away the buggies had to cautiously negotiate the wreckage while suffering damage from ram attacks.
What a great race, both teams have attracted the attention of major sponsors, more tricks next time.