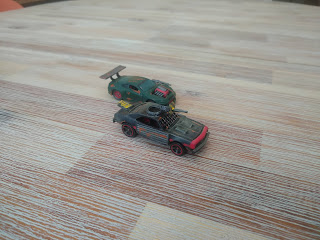 When we were living in the US, daughter Jasmin and her partner Neil had visited for Thanksgiving, we decided to celebrate a UK version now we are back here so they stayed wit us for a few days.

While they were with us I introduced Neil to Gaslands and helped him convert his first two Hotwheels, a Nissan Silva that I had in my bits box with a broken spoiler and a Camaro that we picked up from B&M. 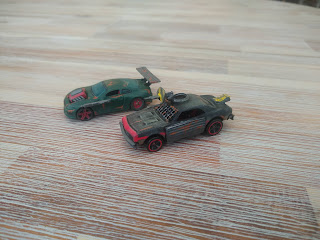 The broken spoiler was replaced with a piece of corrugated iron and the hood was cut off with a Dremel cutting disk and a massive engine installed. A wing mounted machine gun and new rear wheels completed the job. For the Camaro it had a roof mounted pintle machine gun, a dropper added to the boot and a steel mesh windscreen. Front and rear fenders were upgraded with an Iron beam and additional corrugated steel armour was added to the doors.

After he had painted and weathered them, Neil was ready for his first game.

Following Thanksgiving dinner we loaded the dishwasher cleared the table and set up a small circuit for the introductory one buggy, one car introductory game. 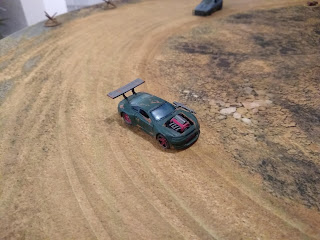 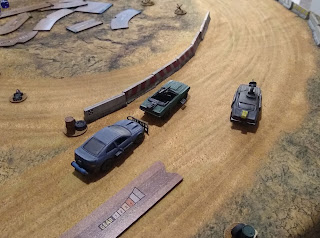 Neil's Camaro won the first game, so we set up again, this time with a performance car and a car each.
Much drifting ensued with everybody throwing them into the corners. 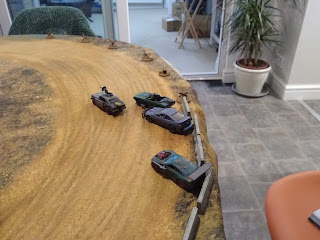 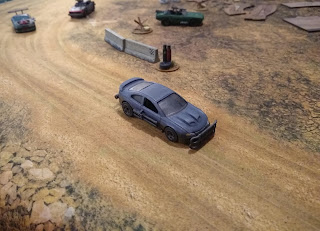 My Pontiac GTO clinched this one in front of the Silva and Neils Camaro, in the above shot my Camaro can be seen straying off course.

Black Friday we lined up again, this time picking a 50-can team each (no sponsors or perks).

Neil took a performance car, car and bike team while I had a truck, car and buggy team.

Five of the six vehicles were wrecked before the finish line so the slow and steady truck took the honours.
Neil has already picked up some more Hotwheels and took some Implements of Carnage home with him, this will hopefully become a tradition.