Gaslands: Mayhem at the Ruddington Raceway 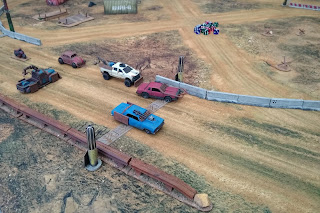 We had planned a multi-player race on Sunday, but a combination of other commitments and illness meant that it was just down to Tom and myself. 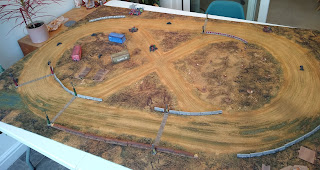 Fortunately I still had Martins gubbins from the last game so there was plenty of scenery and scatter to add to the race.
I had picked four teams in preparation, Tom selected The Angry Champions:
I randomised from the remaining three and took the Wicked Fiends:

We did use audience votes but although collecting a few we never did use any.
Tom has also done a report over on his blog. It was his first game, but I don't think I'll be surprised if he picks up some toys of his own for it.