Gaslands: Carnage at the Lenton Arena 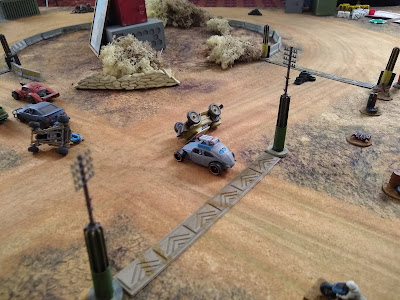 Thursday evening Nick, Mike W, Mike B and myself met up at the Lenton Arena for a four player Gaslands Death Race 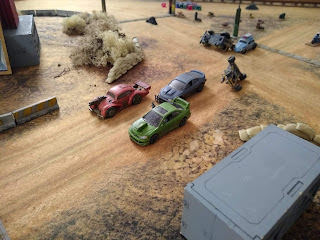 It was Carnage from the off Nicks Idris and Miyazaki performance cars powered over the line while the rest of the pack rushed to catch up. Except one of Mike B's Prison Cars that hair pinned into Nicks buggy, the head on smash with exploding ram doing 20 attack dice! Both vehicles were wrecked outright and Mike W's buggy was destroyed in the resulting explosion - Wowzers race fans!!!!! 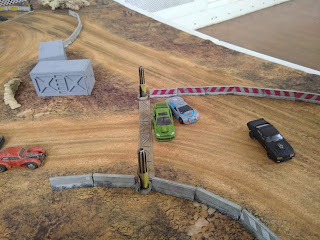 The remaining cars soon passed gate one and were weapons active more mayhem ensued! Powering into the first bend my Civic side swiped the Miyazaki performance car that slipped away dropping a canister of glue, Mikes prison car caught up unleashing the flame thrower on both the remaining Idris and Miyazaki performance cars, at this stage of the race, only just around the first corn all that remained in play was one of Mike B's prison cars and all three of my vehicles! 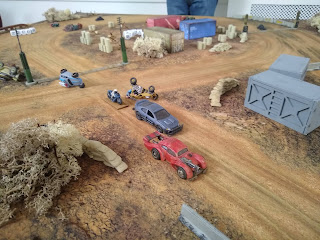 My GTO and bike went wide round the glue, but the Civic was stuck with that line and ended up dropping back a little. My bike got no further than this, the Idris performance car re-spawned at the first gate and a deadly accurate close range shotgun blast did for it. 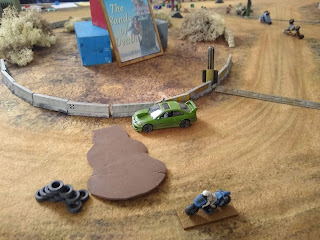 I'd pretty much stopped taking pictures at this point. Mikes prison car was out in front, but my two cars caught up with him and destroyed him, the badly damaged respawned performance cars of Mike and Nick caught up with the pack and nobody made it through the second gate with their original car. 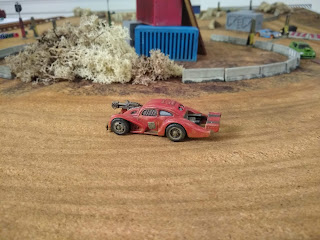 Absolute bloody carnage, every car that had started the race had been wrecked before they got to the second gate.
More of this madness is arranged for next week, we are going to need a shorter track.
Posted by Paul Scrivens-Smith at 22:25
Email ThisBlogThis!Share to TwitterShare to FacebookShare to Pinterest
Labels: Battle Reports, Gaslands