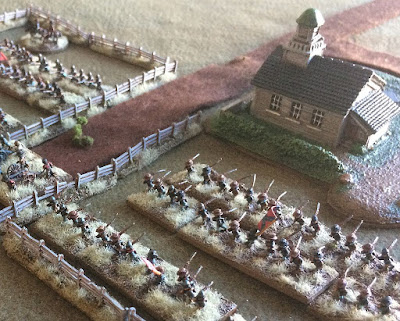 We played this game a few weeks ago and what with other commitments I've not had the opportunity to write up a report.

Last time we played Black Powder, this time we would be using that old favourite, Fire & Fury I picked a couple of fictitious armies randomising if exceptional leaders, number of batteries, crack, etc,

The forces were arrayed as follows, Renton's cavalry was on table, but just out of shot. Browning's III Corps were off table and would not arrive until after an hour (two complete turns) 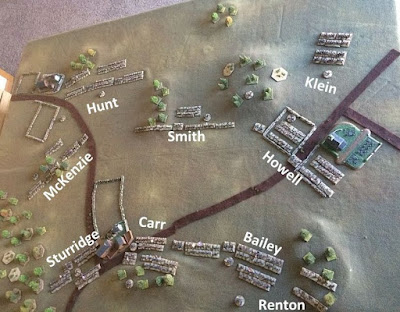 It was decided that Drew would play the Union commander, myself and Bruce the Rebels.

Now it was three weeks ago now and my memory of the game is a bit sketchy, (fortunately I had a list of the units and a sketch match of the initial deployments.

Bruce and I's plan was to hold the flanks and drive Smiths and Hunts divisions through the Union centre. Hunts especially is a big force with two very large units of 12 stands. 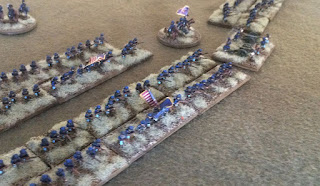 In the initial artillery duel the Confederate artillery did very well, driving back and/or damaging most of the Union batteries. As to the execution of the plan, Baileys Federals were able to easily drive Howells force back out of the farmstead on our left, while Sturridge's divison extended into the wooded hill to their left and were soon outflanking McKenzie's division.

With their left flank exposed Smith was unable to support Hunt as he had to use his own troops and Klein's horse to prevent a total rout on the left.

As Hunts brigade fell on the Union centre Brownings Corps arrived in time to secure the line. The farthest Confederate advance was by troops of McKenzies division who managed to push back the Union line to the left of the farmhouse and fall upon Clansen's arriving troops before being driven back by Sturridge's flanking force and the newly arrived III Corps artillery. 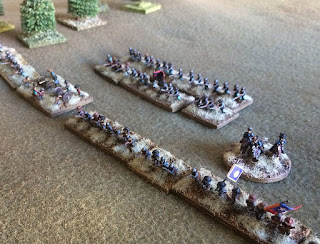 By the end of the game, both sides had lost a similar amount of troops, but with their attacks in the headway able to male headway and their flanks being driven in the Confederates would quit the field and leave the Union troops in possession.

Drew decied to call this the Battle of Sessions Hill as Jeff Sessions position had just been confirmed, it looks like my delay in writing this may coincide with his position looking about as tenable as the Confederate one at the end of our game - there is a little political diversion for you :)

More pictures from the game below. 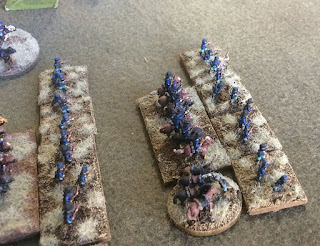 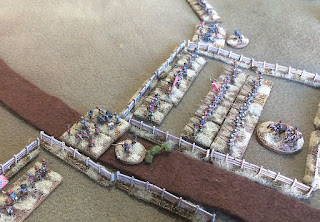 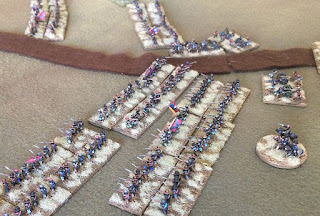 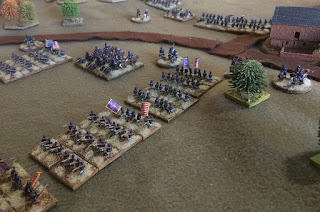 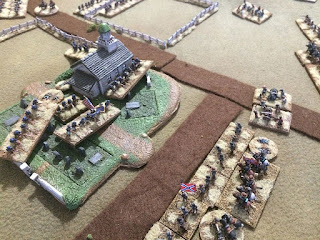 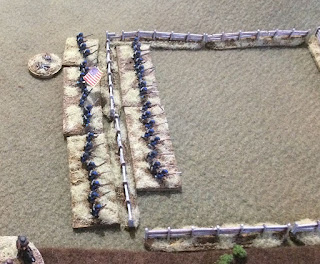 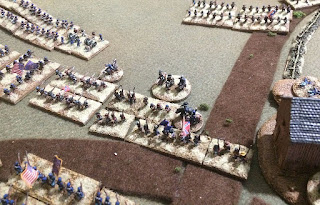 Posted by Paul Scrivens-Smith at 08:05