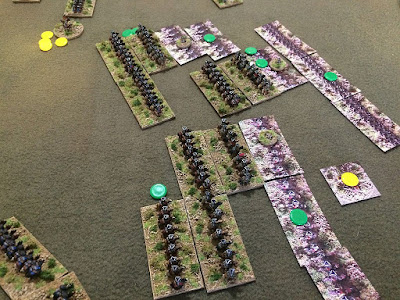 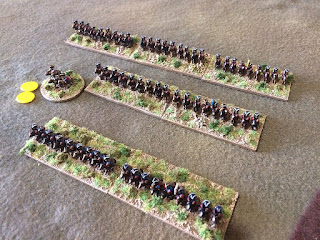 
I've only gotten a handful of French units painted so I took some top-down shots of some of my units and then took them to Office Depot and had them printed out and then cut them out to the required size. A purchase of $14.00 dollars saw one sheet of Warflags three laminated quick reference sheets and the whole French army ready for battle. It's not as spectacular as playing with figures but better than not playing at all. 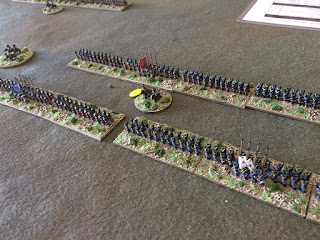 I picked two roughly equal armies to oppose each other both of three Infantry Divisions and three Cavalry Divisions, for our first game all units would be classed as Trained and all Generals rated as Active, this would hopefully keep things simple for the first game. In retrospective, we probably had far too much stuff on the table for an initial foray into the rules and splitting just the painted stuff we had in half would probably have been better. 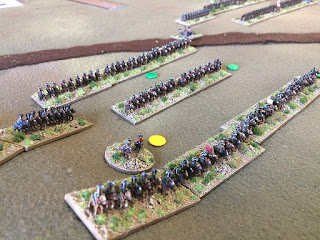 On our left we had the advantage of an extra division of horse while on our right we were at the disadvantage, so we committed to holding out on the left whilst trying to batter through on the right with our infantry swiftly closing in the centre to take advantage of our superior close ranged fire effect, if we could pin the French infantry in place they would not be able to take advantage of their A'Prest bonuses.

It went very well on or right and with just our lead division we had crushed and broken the opposing French horse, hastily re-positioned French infantry tried to shore up the line. The loss of the French horse on that flank saw almost half the critical morale of the French gone. 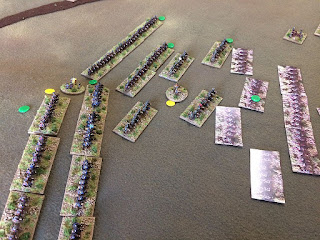 On our left we soon had lost one of the brigades of horse, but we were clinging on, passing several brigade morale tests and keeping our troops in the fight while our reserve infantry division moved up to cover any French breakthrough.

The centre was a devastating fire fight, initially the Dutch loosed some crushing volleys, in some cases the initial shots causing the opposing French to give way completely, but the line eventually stabilised and the firefight ensued. 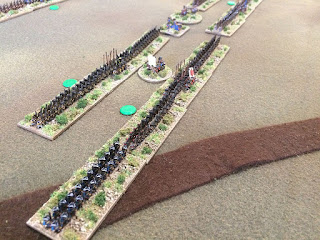 With time about to be called we did a quick count up, the Dutch had conceded none of their critical morale points while the French had lost five, also the advantage of units lost was swung in the favour of the Dutch, we wrapped up giving a minor victory to the United Provinces and we need to re-read the rules to see what we did wrong.

Some points we raised from the game, if you've got some experience with the rules we'd be glad to hear your thoughts: 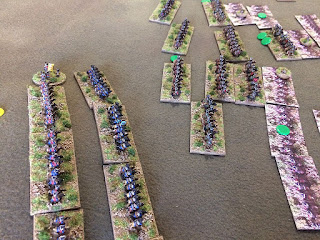 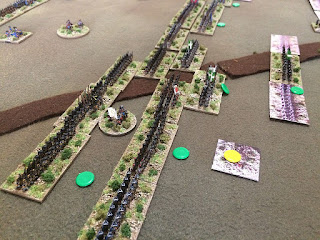 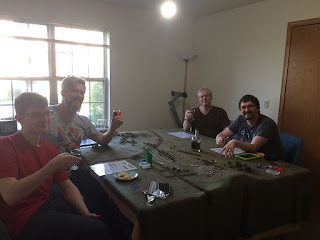 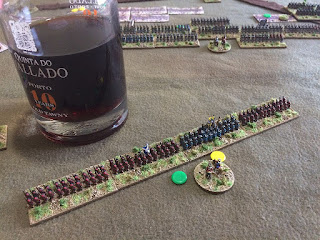 Posted by Paul Scrivens-Smith at 20:46