I have painted rather a lot of Dutch this year so it was about time that a few Frenchmen appeared to challenge them, so, this week I made a tentative start on them painting up three battalions from the Regiment Champagne. I painted this unit as I'd done them before in 28mm for a project that never got off the ground.

This time though, it's easy in 6mm and was not a lot of work to paint three battalions along with a couple of field pieces. 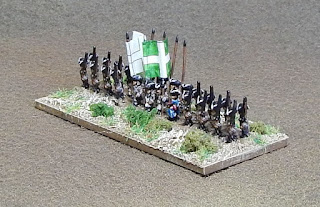 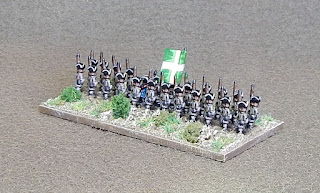 Colour guides for the French artillery of the War of the Spanish Succession are quite contradictory, but I went for grey coat lined blue with red trousers and stockings, I quite like how they turned out. 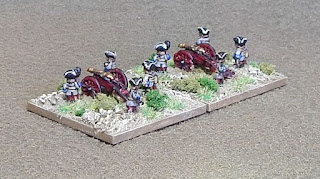 Finally, we have our first WSS game today so I wanted to add some suitable buildings, I purchased ten from the Action 6mm range by Monday Knight Productions. Noble Knight did a sterling turn around on the order and they were here in two days, the buildings are clean casts and nicely done but most are rather useless for my needs. They are really mid-late 20th Century Americana and not suitable for Northern Europe, I picked the four most suitable, mounted on some spare 80mm x 60mm bases and got them painted up. I'll likely pick up some of the lovely Total Battle Miniatures ones when next visiting the UK.

Posted by Paul Scrivens-Smith at 13:55