Patrolling in No Mans Land 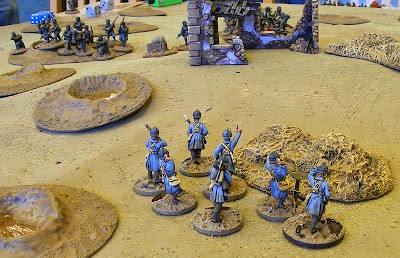 Following on from our earlier games we played another Chain of Command game at the White Hart on Thursday evening.

This time we decided on the simple Patrol mission pitting James platoon of Frenchmen against my own of Germans, James would be assisted by Mark. 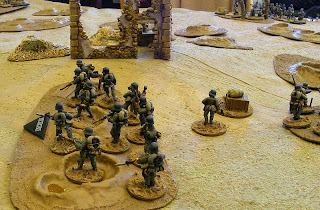 The terrain was laid out, just off centre was a ruined building on a large hill, the remainder of the table gently undulated and was heavily pock-marked with shell craters, a few areas of ruined tree stumps made up the balance.

Rolling off for force morale, the Germans came up a 10 while the French were starting on a 9. Playing out the Patrol Phase the Germans went right and the French pushed to the left so the Jump-off Points were eventually deployed as the image below. 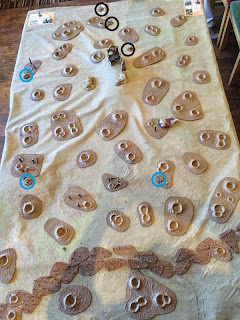 I had two points to spend on Force Supports and picked an Adjutant and a extra Lewis Gun to add to one of my Light Machine-gun Gruppe, James spent all three points on a Hotchkiss machine-gun.

Given the large number of French support weapons I thought it would be suicidal to try and take them head-on so decided that I would create a bastion behind the large rise and let them come at me.

The Germans took the first phase and a patten developed, a six, two fives and two fours, I would not be doing anything. 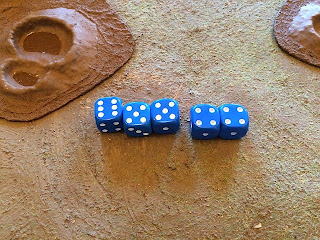 The French deployed the Hotchkiss in the woods that overlooked my positions so I countered with a Light Machine-gun Gruppe and did some good damage. To prevent the Hotchkiss from being shot up by my Light Machine-gun Gruppe James also deployed a section of Grenadier-Voligeurs to stiffen that position. Two French Support Sections were deployed covering my other Jump-off points practically denying them to me. 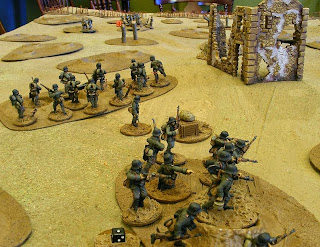 The Light Machine-gun Gruppe was trading shots with the Hotchkiss and supporting Grenadier-Voligeurs with neither gaining the upper hand until disaster struck and my Leutenant was killed outright. I was using a different figure to my usual Leutenant so will blame it on that! 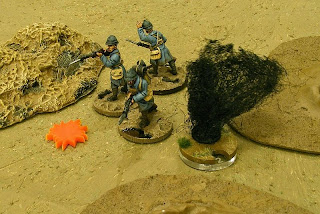 Fortunately, my poor dice rolling earlier meant that I had a Chain of Command dice to avoid the requisite test. 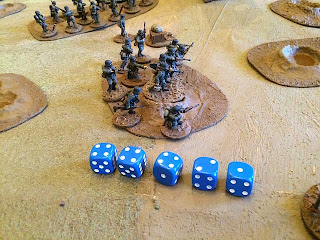 The French tri-colour always seemed to roll much better, in two consecutive phases ending the turn and also maintaining the initiative for another at one stage. 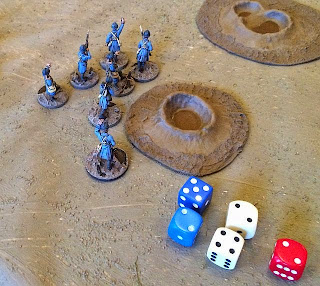 Things were looking up for the French but it was going all their way, inexplicably, one of my Rifle Gruppe was winning the fire-fight against a Support Section and eventually broke them.

Things were going the way of the French, however, I had only deployed one each of my Light Machine-gun and Rifle Gruppes so had plenty in the bag. I then made a really stupid mistake, James pushed one of his Grenadier-Voligeurs towards the ruined building in the centre so I deployed my reinforced Light Machine-gun Gruppe against them, the Frenchmen were shot up badly, but after all the Support Section overwatch fire and a couple of phases of concentrated Hotchkiss, Chauchat and VB fire my section broke an ran for the rear, only a couple of casualties but a whopping 18 Shock! 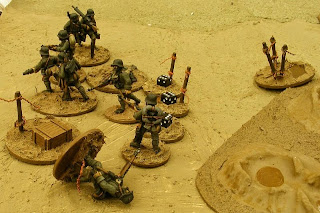 The game was pretty much up for Fritz, but I held on grimly inflicting plenty of casualties on Monsewer but I could not play for time and eventually my Force Morale collapsed.

The first German loss of our games, although it has been coming for quite some time as the recent games have become tighter and tighter. Using a full strength platoon of Frenchmen is really turning the odds in their favour. 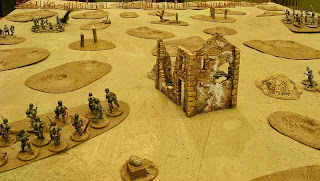 A few more shots from the game. 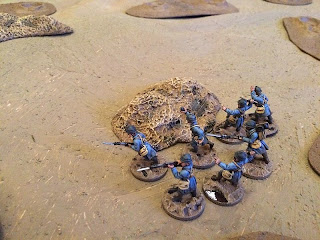 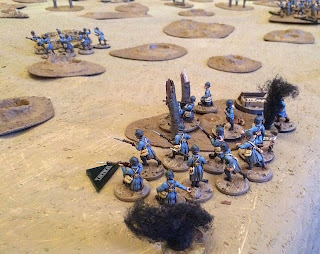 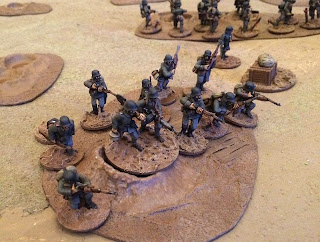 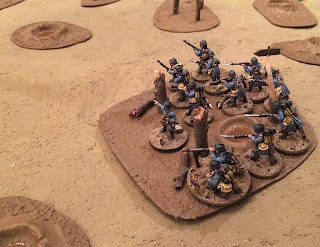 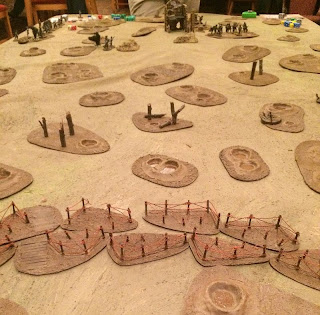 Posted by Paul Scrivens-Smith at 06:25