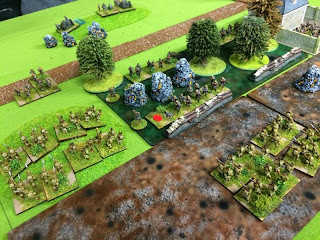 A few weeks ago James purchased a copy of the Square Bashing rules from Peter Pig. Having read through them there were quite a few unfathomable steps and much scratching of heads. 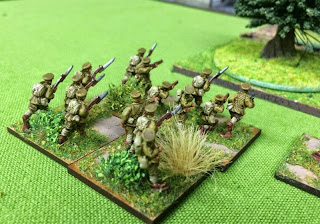 During a chance meeting at Salute with old chums Pete and Simon, talk came about to Square Bashing and how it played. Pete and Simon are old hands and offered to host a game at their club. 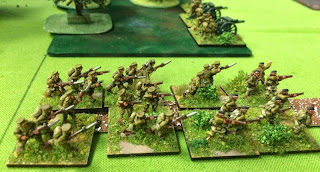 So yesterday evening I drove over to James' had some pizza for tea and then we went to Burton Upon Trent for a session of Square Bashing. 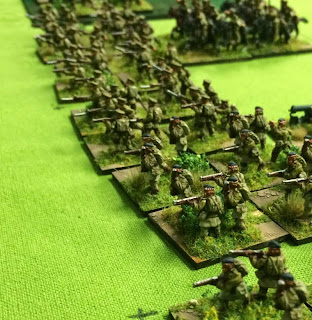 Simon has a lovely collection of 15mm armies for 1914 games and a collection of some rather lovely terrain. James and Simon would play the vile Bosche while myself and Pete played the noble Tommies. 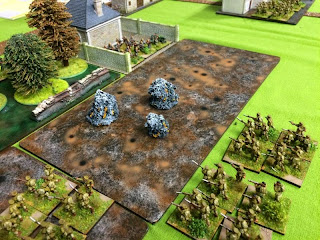 We played out the pre-game sequence and it appeared that we would be attacking the Germans who had set up a defensive position around a small town and the neighboring woodlands, two of our battalions had used public transport so arrived early at the battlefield to gain a small advantage. 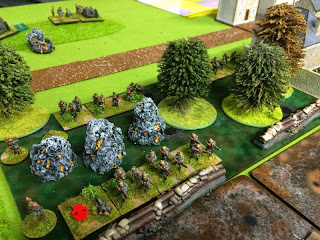 The game started and Tommy pushed on, immediately seizing two of our four objectives while a concentrated bombardment caused Fritz to cower in terror, things seemed to be going rather well. However, we could not have it all our way, on our left the advance guard who came by bus were ensconced nicely on an objective and Fritz could get nowhere near, but then the German artillery opened up and our centre was unable to push on for two turns and were badly shaken up by the suppressive barrage. 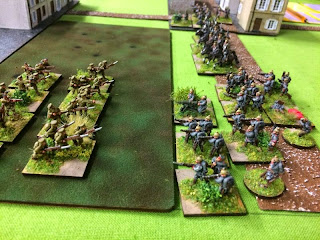 On our right, leaving a Vickers platoon to hold the woods we had to take, the remainder of the brigade pushed on towards German held crossroads pushing towards the right to avoid the Maxims deployed there. 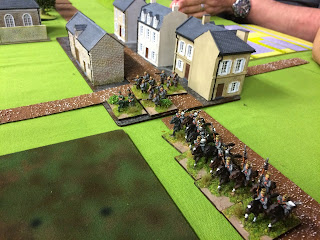 The German reserves were now pushing on from the rear, although their woodland in the centre was struggling it would not take long for them to reinforce that position. A concerted bayonet charge by our troops on the left soon cleared the Hun from half of the woodland although they were unable to press the attack and clear the entire area. 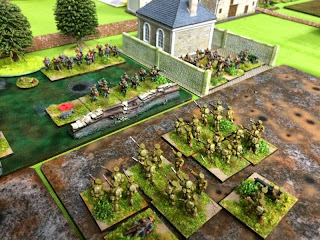 On our right the German reinforcements came up to blunt our flanking manouver, but Tommies aim was true and the attack was driven off, however when we tried to follow up on this success we were also driven back. 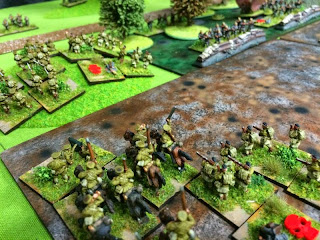 With the clock ticking things were not going well for the British attack, we had secured two of the four objective and were unable to make headway against the remaining two while German reinforcements poured on to the battlefield. 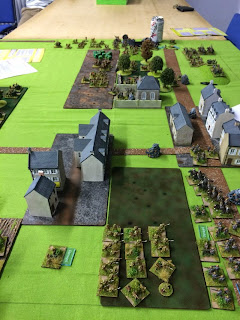 A poor day for the British, despite the early gains they were eventually driven back by the Hun!


Pete, Simon and the Burton club were great hosts. The game seemed very easy to play although the pre- and post-game phases seemed a bit odd, maybe after a few more games we would understand that better.

All the lovely figures and terrain are from Simons collection.

Posted by Paul Scrivens-Smith at 07:02