Trying out some ideas for Partizan 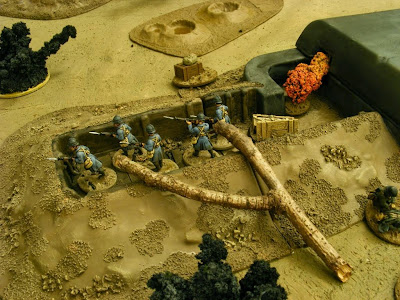 With the help of Dave, James and I  are running a WWI game at Partizan at the end of the month featuring the attack on the Bois Des Caures during the opening stages of the Verdun Campaign.

Now there are no lists for the earlier war period so we decided on the following.

The Germans get a Leutenant (Senior Leader) and four sections each of a Gefreiter (Junior Leader), eight Riflemen and two Bombers.

Based on the devastating preliminary bombardment the French platoon consists of:

To enhance the photographs, James had painted a rather lovely backdrop to save you all seeing that horrible wallpaper from the White Hart.

James had also painted quite a bit of his terrain including the Ameera bunker that we used and some wrecked trees.


We decided to represent the final drive on Driants headquarters. The French had a concrete bunker and three other emplacements, the Germans would win by taking the bunker. James Morris took the French and would be assisted by James Woodward while I handled the Germans on my own.

I started the Patrol phase with a very aggressive D6 free moves and pushed quickly towards my left flank effectively cutting the French off from their two positions on that side. The bunker had a single firing slit facing that way and hopefully I would be able to rush it without too much incoming fire.

We finished with our Jump-off points has marked here. I had 11 points to spend on supports purchasing a pre-game bombardment, Maxim 08 machine-gun, off-table machine-gun, sniper and a flame-thrower. The off-table target is shown on the the image as a cross, hopefully this would make the defenders think twice about using that jump-off point to deploy troops in the communication trench attached to the bunker.

James spent his 5 points on a sniper and a Hotchkiss machine-gun.

I took the first turn and deployed my first section on the jump-off to the left of the bunker and my sniper in the centre of the table. James countered with his own sniper then deployed his Hotchkiss in a position to the right of the bunker and put it on overwatch. 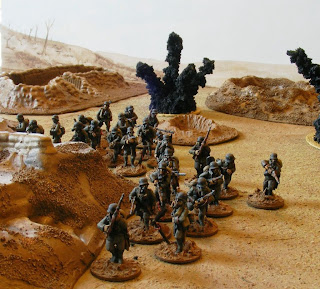 Using the cover presented by the raised position to the left of the bunker I moved that section along out of sight and joined it with another and my flame-thrower. James was unable to target my troops as his own bunker blocked his fire.

James deployed a section in the bunker, but the single firing slit on that side made the fire on my main assault quite desultory. Another section of Poilu was deployed behind the bunker, seeing his chance the Leutenant deployed and ordered a charge into the Frenchman preceded by a barrage of grenades. The Frenchmen were wiped out to a man and we were now starting to surround the bunker. The supporting Rifle section and the flame-thrower closed in on the troops cowering inside.


Seizing their chance my leading section having wiped out the Frenchmen before them tried to seize the communication trench from the bunker but were cut down by accurate fire from the Hotchkiss.


I then deployed another section of riflemen and my MG08 in the centre to pour fire into the Hotchkiss which was soon down to a single crewman and its Sergeant bravely keeping the gun in action. Things were looking bad for the French though. The flame-thrower closed on the bunkers firing slit and let rip with two quick bursts of flame. The bunker defenders, their sergeant dead, routed and my section flanked the bunker and I ended turn and hence the game. A good victory for the Bosch, mainly won in the Patrol phase when I managed to get so close to the bunker and also compounded by James not putting his Hotchkiss in the bunker.

The random Frenchmen worked quite well, James deployed three section getting a 7 with a wounded junior leader, an eight with a junior leader and a three with a junior leader. The -2 on 'bad things happen' rolls meant that the French almost had to be killed to a man so it felt about right for representing the defenders of the Boise Des Caures.


As you can see we are steadily improving the terrain and the painting that James did makes a great backdrop to our photographs.

Here are some more shots of the game. 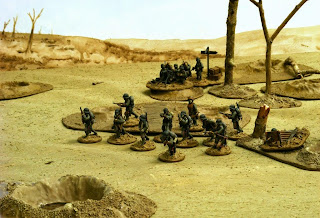 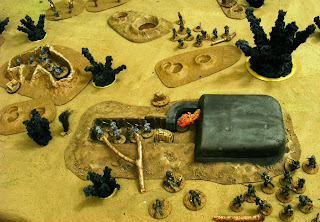 Posted by Paul Scrivens-Smith at 13:46