To The Strongest with Romans and Gauls 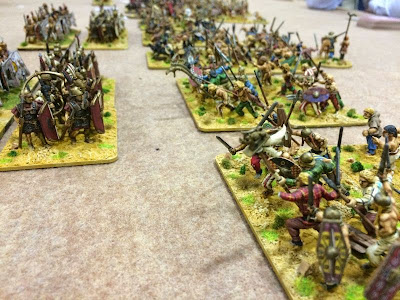 On Tuesday evening James W, Steve M, Martin, Greg and myself had our first game of To The Strongest for quite some time. It was our first try with the new V1.1 rules and they seemed to work out rather well.

We pitted a Marian Roman list (from the rule book) against a fairly vanilla Gallic force. 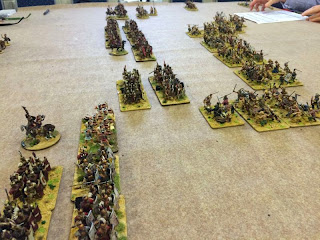 Steve and James took the Gauls while Martin and Greg took the Romans. 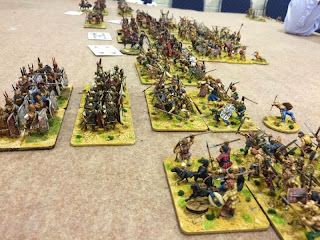 In a disastrous start the Gallic cavalry general fell dead from the first combat of the game. As the game progressed the two units of Roman Veterans proved their worth holding out for a out for a long time, not taking a single hit against the increasingly depleted Gauls. 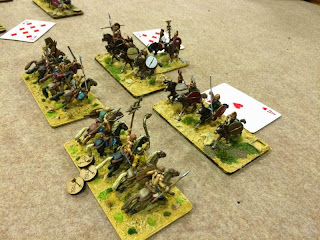 Gallic pressure eventually started to tell though and in quick succession the Romans lost a unit each of Cavalry, Legionaries and Auxillia. 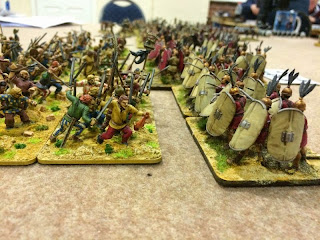 However, things went downhill quickly for the Gauls who in short order lost three of their large warbands, the Gallic centre was devoid of troops as can be seen in the image below. The Romans still had five Victory Medals left while the Gauls a solitary marker! 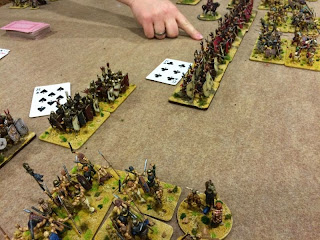 Finally, a unit of Gallic cavalry succumbed and it was all over for them. Victory to the Romans.

You'll note from the pictures that we have gone back to playing cards, it feels better and somehow is more fun than the chits.

Email ThisBlogThis!Share to TwitterShare to FacebookShare to Pinterest
Labels: Battle Reports, To The Strongest