The final scenario of our ongoing Verdun 1916 campaign is the German attacks on Colonel Driants' command bunker in the Bois Des Caures on the 22nd February 1916.

Following on from the previous inconclusive action Leutnant Schmidt was dead and his Stosstuppen badly depleted, it was time for the German second wave to take the lead and I elected to field a platoon of regulars from the 87th Infantry Regiment.

We would be playing the Attack on an Objective scenario with the final objective representing the command bunker itself, here is a picture of myself James and Nick at the very place during our tour back in August. 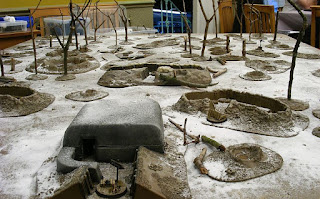 Rolling for Force Morale, the Germans would start on a pitiful 8, not a good start for new troops in the action. While the French rolled well, but the campaign effects so far at least tempered them back to a 9. 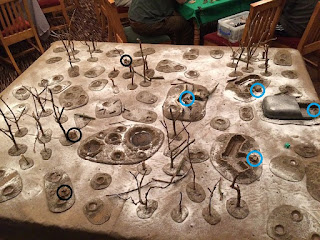 We played out the patrol phase and our Jump-off points were deployed as per the aerial photograph of the battlefield. My force supports were a generous 11 points and were spent on a 77mm field gun and crew, an Adjutant, a flamethrower, a pre-game barrage upgraded to Feurweltz and a pair of trench brooms. The French defenders spent their 4 points of support on a pair of trench brooms of their own and a Hotchkiss machine-gun.

The first two phases of the German advance were tardy, although at least we were well on our way to a Chain of Command dice. 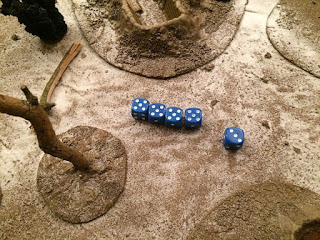 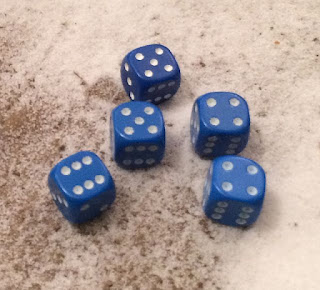 The single three did at least mean that a large section of Grenadiers argumented with a couple of Trench Brooms were able to deploy although the French deployed their Hotchkiss and opened fire on them to little effect. 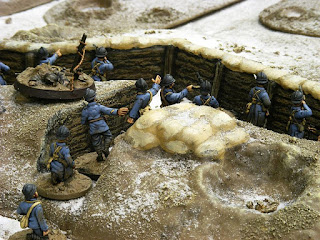 We were both more successful with our subsequent rolls, My large squad to the right again survived unscathed in it's bid to get into the Hotckiss's dead ground but a section I deployed on my left  to cover them suffered the first German casualty of the game as their Gefreiter was killed stone dead. 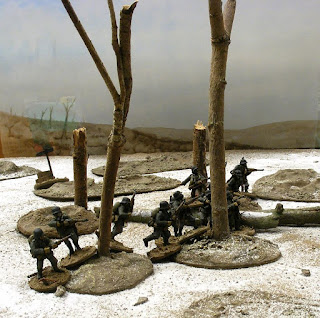 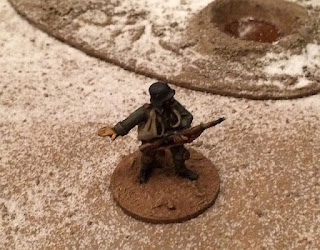 As my section on the right continued their advance the 77mm field gun deployed and opened up a steady fire on the Hotchkiss and it's supporting infantry. The Leutnant saw his opportunity, expending a Chain of Command dice he pushed the right hand jump-off point up behind the first section and then deployed a second section ready to assault the first French positions. 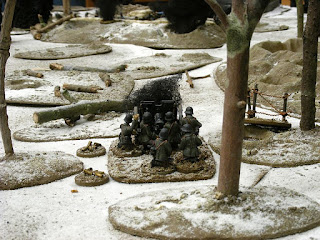 Colonel Driant immediately rushed reinforcements to that part of the line, but following a cry of 'Greanten' the Germans lobbed grenades into the trench and both sections surged forwards. Unfortunately, the regulars from the 87th Infantry Regiment were not as keen as the Stosstruppen and came up well short (for my two moves to contact on 2D6 I rolled a 4 and a 2!). Concentrated defensive fire from the trench had little effect so Scrivener again ordered the charge and this time the position was carried. 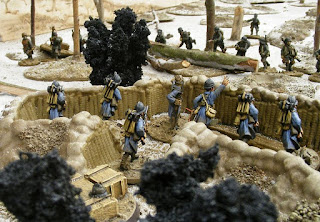 With the greatest threat to the French defences being on their left the Hotchkiss was unable to cover that position so set up a deadly accurate fire on the field gun accounting for three of the crewman. Scrivener consolidated his position in the trenches to the French left, ordering one section to move on to the command bunker he led the other section in a sweep across the front French positions.

The section advancing against Driants' position came under rifle fire from a small section of defenders holding the bunkers communication trench and a redeployed Hotchkiss dragged around to fire to its rear. Accurate and deadly fire forced the Germans to retire and consolidate in their previously held position.

However the section moving along the French first line had great success, first taking a rifle section in the flank and routing them. The panicked Frenchmen ran along the trench causing consternation among the Hotchkiss crew who were then set upon by the victorious pursuing Germans. 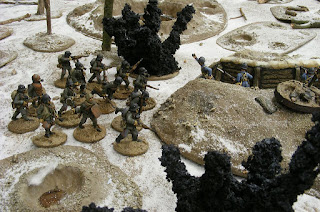 A lull now followed as both forces reorganised, Scrivener crawled out of the trenches and bought forwards the leaderless section, while the Jump-off point was redeployed and the final section of Germans and the flame-thrower was put into position for the final assault on the command bunker.

Driant was in trouble, with only himself, a couple of Caporale and about a dozen Chasseurs it looked like the game was up.

Scrivener mustered his forces, one section would move around the left side of the bunker while another took the right. In a concerted attack the Gernadiers closed in on the beleaguered defenders of the communication trench, all nine Frenchmen including Driant were slain. However, twelve grenadiers were also killed. Having lost the combat the Grenadiers fell back from the position. 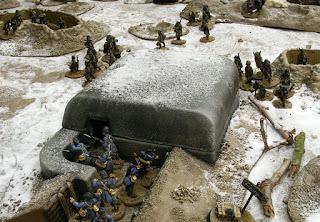 Unfortunately, with Draint and the last big section of Chasseuers wiped out (a small section of three plus a Caporal were manning the bunker itself) the French force morale collapsed and the game was over. As I had fallen back from the combat I was not holding the objective so due to the rules for the attack on an objective scenario it defaulted to a French win. As you may imagine I was awfully disappointed I had my Leutnant, two unscathed sections, one quite battered section, my flame-thrower and 77mm gun remaining, the French had a Caporal and three Chasseurs left and I had also removed three of their four jump off points.

The campaign has been great to play and hopefully we will kick off another one soon.

Most of the photos were by James as I only had my iPhone and the White Hart is pitifully dismal. 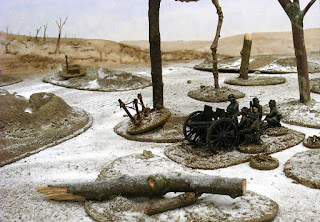 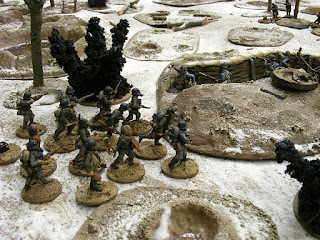 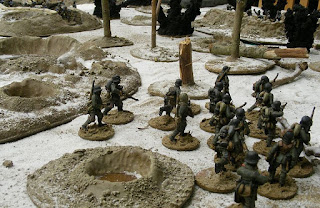 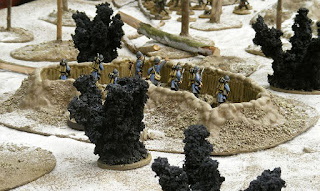