On Thursday evening at the White Hart Karl from Northstar was kind enough to give myself, James (Woodward) and Reg? an introductory game of Frostgrave.

We drew lots and I would be the Necromancer, the others drew (IIRC) Elementalist, Witch and Warlock. We all had a retinue of two men at arms and an archer. 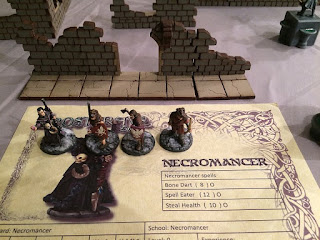 Each player rushed to grab the closest treasure token to my left Reg was busily building walls while I was Bone-Darting everybody in sight. 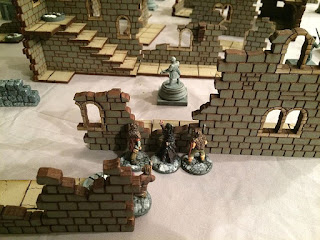 My archer took a potshot at James's Warlock and in return was blasted by a hail of magical grenades that fell among my party. However, one of my Men at Arms had grabbed some treasure and was making away with it. 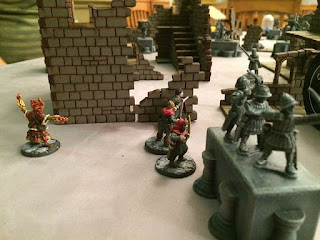 James foolishly put his Warlock in line of sight. I failed to cast, decided to burn health to make it successful and blammo - rolled a 20 and his Warlock was blasted to atoms :) 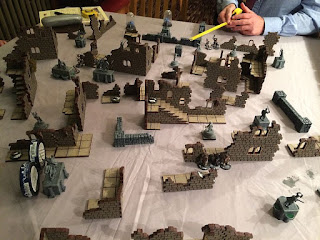 James had a little sulk and was then trading blows with Karl's Witch who was severely wounded while my second man at arms made off with another treasure token. 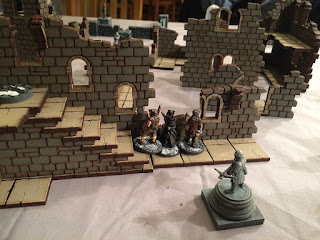 By the end of proceedings I had made off with two treasure token and had obliterated James's caster so ran out the winner. Obviously then Frostgrave is a fantastic game :) 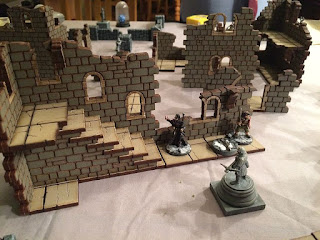 All the terrain and figures were painted and supplied by those lovely chaps at Northstar.
Posted by Paul Scrivens-Smith at 20:35
Email ThisBlogThis!Share to TwitterShare to FacebookShare to Pinterest
Labels: Battle Reports, Frostgrave