War of the Spanish Succession Dutch(10) 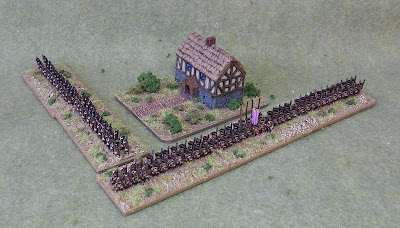 I only started painting a few of the War of the Spanish Succession troops in the lead mountain as I was taking a break from the Hundred Years War project while I ordered more troops, well I've been solidly painting them now for a few weeks and am really enjoying doing them.

Firstly another building from Leven Miniatures, their Medieval Manor House a great building with some great details. 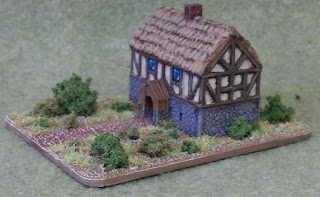 As usual I based the building both for protection and to help delineate the built up area that it represents. 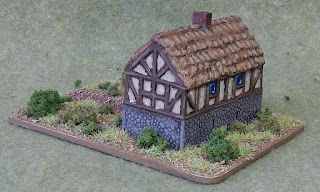 The Dutch contingent got a boost in this update too, firstly a unit of 72 figures representing the Nassau Usingen regiment with grey coats and carmine red cuffs, trousers, waistcoats and lace.

Quite a while ago (checks, June 2017) I painted a stand of infantry as Murray's regiment of Scots in Dutch service. Since then I've been making all my units of foot up to 72 figures and these were the last to get done with another 48 painted over the weekend.

I've not been so happy with the photos of the 6mm stuff they always seem to come out rather dark, but this morning while taking the photos above I had a go at some 'extreme close up' shots to give an idea of the detail that goes into the sculpting of these Baccus War of the Spanish Succession figures making them a doddle to paint.

We are playing Maurice again tomorrow night, hope to be able to use some of the terrain and buildings that I have painted of late.
Posted by Paul Scrivens-Smith at 13:37