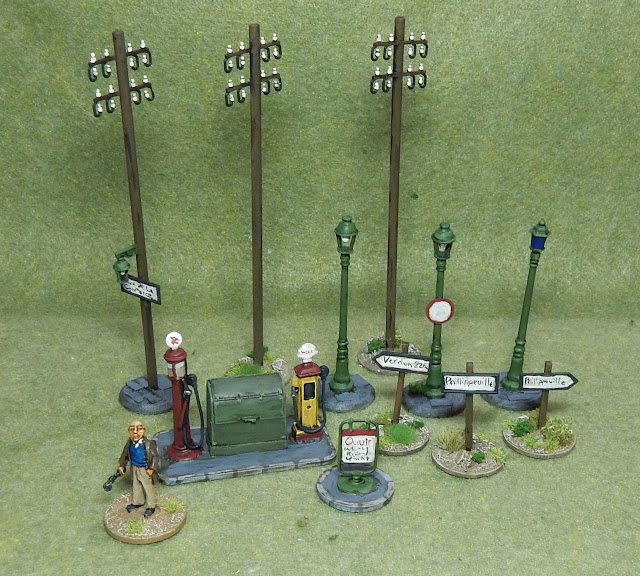 Having painted all those Senegalese Tirailleurs I thought I had better get cracking on some suitable terrain for them to fight over, so for the past few weeks I've spent less time painting than usual, but more time working on some terrain.

Earlier this year when I was at Little Wars I picked up the First Corps Fuel pumps and attendant set from Scale Creep and it's sat in the backlog since then as I was never sure of what to do with it.

I finally set my resolve and set about slapping some pain on it last weekend and I'm quite happy how it came out. It will make a nice garage forecourt for the town. 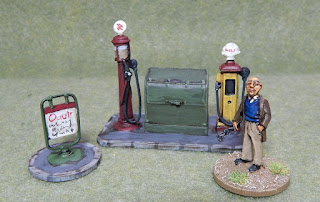 You know how it is, sometimes you don't know you need something until you see it, and that was the case when I read Tamsin's post from a few months ago. That Rubicon Models Utility & Light Pole Set is brilliant.

I've assembled most of the stuff and gotten a few bits painted.

Three lamp posts, the set comes with loads of street signs so I added one to one of the posts. The flagstones on the bases are just cereal box card. 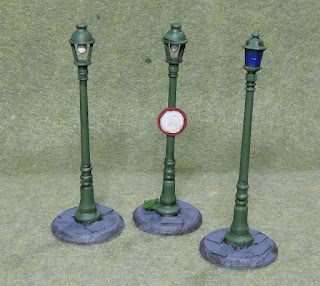 There are components for loads of road signs that you can make and I've done what will likely be the first three of many. 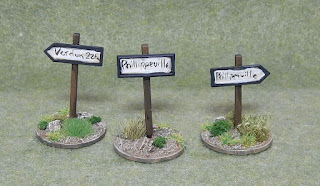 The telegraph poles in this set are much better that the ones I picked up from the model railroad shop a few months ago. The extra components mean you can add street signs and municipal lamps to them. The middle one in this set of three will be 'in town' while the other two are out of town. 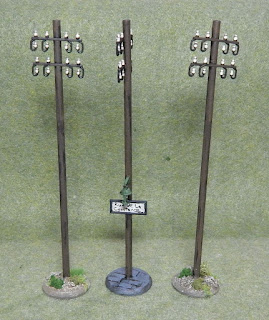 Earlier this year I posted the Warbases workshop that I had built and painted. I thought it needed a little something more so I first of all added a base to it. The cobbles are from Wills Finecast, I picked them up years ago and don't think that they are available anymore.

The rest of the base is done in a rough wasteland with scrubby grass and weeds. 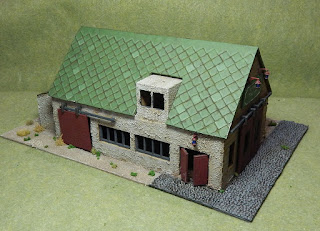 I also perked it up a bit by adding a commercial sign and some of the bracket lanterns from the Rubicon Utility & Light Pole set. 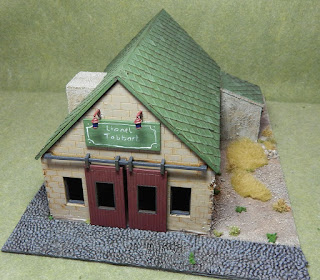 I'm much happier with how it looks now, I think it was a bit 'flat' before. I may print out and add some posters at a later date. 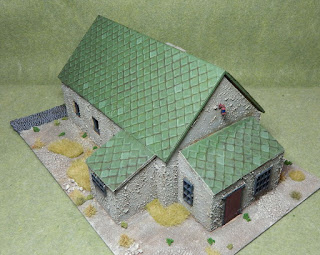 Finally I knocked up three small hills. These are 'pink board' stuck to artists mount board and sealed with decorators caulk. Once that was all dry I textured with fine sand and added some grit and larger rocks before spray painting green and then 'dusting' more patches of colour on with spray paint.

The grit was given a light drybrush and the exposed rock and larger boulders painted Basalt Grey and then highlighted. 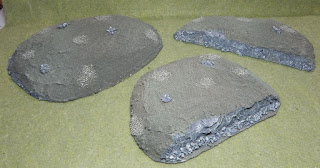 Posted by Paul Scrivens-Smith at 08:07