A bad day for Blighty 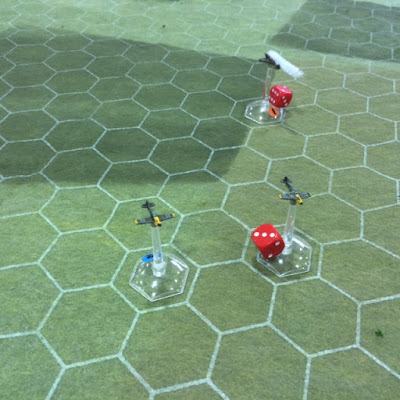 It's been a bloody long time since I last played Bag the Hun, but on Sunday Martin agreed to have a go at it on our Tuesday night gaming session.

I set up a pretty simple scenario. A Rotte of four ME109s escorting four HE111 would be bounced by a flight of two sections of three Spitfires. I would play the RAF and Martin the Luftwaffe.

Rolling for the pilot quality the Germans rolled fantastically and ended up with four veteran fighter pilots while the British comprised three Regular pilots and three Sprogs. 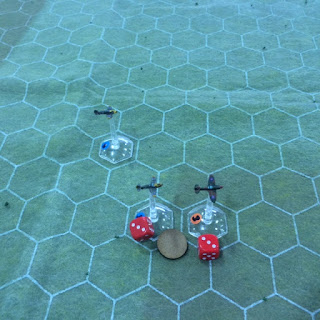 Red section went immediately for the bombers while Yellow section tried to tangle with the ME109's this went disastrously, two Spitfires were immediately out of action with a dead pilot and a catastrophic structural failure. Yellow One was also wounded and blacked out was spiraling to the ground although our hero recovered.

Red section closed in on the bombers and let rip a fusillade of fire, the net result was two Spitfires now had jammed guns and one Spitfire did so badly he fell out of formation and all to show for it was slight disruption to the bombers formation.

Having dispatched Yellow section the Rotte went for Red section immediately shooting one down and damaging another so badly that it had to break contact and head for home. Yellow One having recovered came back into the fight and got on the tail of one one ME109 but badly loused up the firing and was picked off by a wingman. 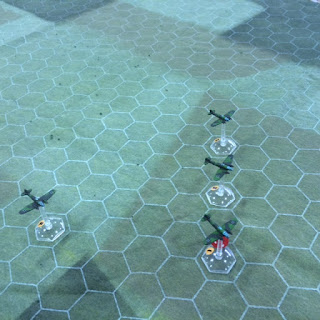 For the loss of two pilots dead, three shot-down Spitfires and two damaged Spitfires the RAF had only succeeded in knocking one of the HE111 out of formation and that would likely still have completed its mission.

Only a handful of photographs, I was far too busy remembering how to play!