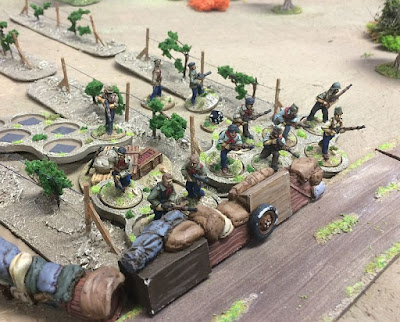 On Thursday I travelled down to the Burton and District club to meet up with Simon and Peter again following the introduction that they gave myself and James to Square Bashing last month.

This time James and I would be giving Simon and Peter an introduction to Chain of Command using the Spanish Civil War collection.

Unfortunately, James found out the day before that the OFSTED inspectors would be pouncing that day so had to cancel, I was on my own.

Last week I had finished off the Guardia so I planned a very early war scenario set in July 1936 the local Guardia Civil have declared for the rebellion and move to confiscate the arms that have been seized by the UGT militia.

We would play the Attack and Defend scenario with Peter as the Republicans and Simon as the Nationalists. After playing out the patrol phase and allocating Force Support the two factions were:


Both factions would start on Force Morale 9. 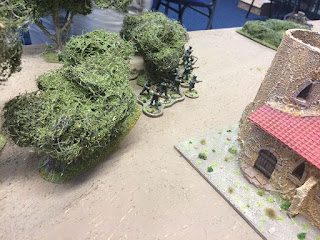 Things initially looked very dicey for the Militia as one squad in the vineyard, albeit behind barricades, was subject to withering fire from a Guardia section, the Bilbao and the Hotchkiss. However, Peter was able to manage the Shock they were taking very well and withdrew that squad and replaced them with another.

A well sited Militia LMG eventually also managed to take out the Hotchkiss although their position became very dicey as the second Guardia section deployed in the Taverna and started a very telling fire on them. The Jefe ran from his position in the vineyards back into the centre where the point of crisis now was. Despite a glancing bullet wound that occupied his attention for some time he rallied the troops in the centre and despite them being reduced to just a handful of men they were still able to provide return fire on the Guardia. 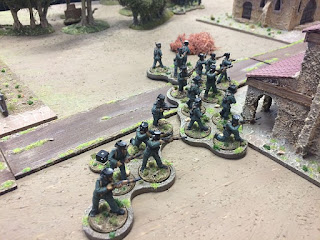 The clock had been ticking along and it was about time to pack up and go for a beer. Neither side had achieved its objective, but, the Militia were still on Force Morale 7 while the Guardia had been reduced to Force Morale 4 so we declared a winning draw to the Republicans - a rare event indeed, they usually get a proper pasting - Peter had done a great job of managing his shock and avoided the inevitable kill on the Jefe that usually puts paid to any Militia defence.

Simon has also done a report on the BAD Wargamers blog.

Posted by Paul Scrivens-Smith at 03:19