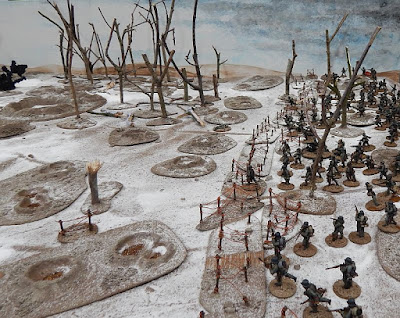 Yesterday James, Dave, Matt and myself put on our Bois Des Caures game at Partizan.

The game is based upon the attacks of the 22nd February 2016, the previous day approximately 80,000 shell fell on the area of woods 1500m x 1000m and German patrols had seized the initial French line of supporting positions.


‘Of every five Chasseurs, two are buried alive in their dug-outs, two are wounded and the fifth waits.’ 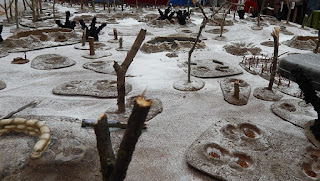 Having survived the two horrendous bombardments, Driant’s remaining men men are now facing a huge German attack in the confusion of the shattered woods.

We played with random forces on each side. The French were comprised of Colonel Driant (Ranking Senior Leader), Lieutenant Robbin (Senior Leader), six sections of Chasseurs (see below), three Hotchkiss machine-guns and an adjutant and a sniper.

Chasseur section
NCO: roll a d6:
The NCO is accompanied by 2d6 Chasseurs with rifles.  If a double is rolled, the squad includes a VB rifle launcher team of 2 men.  For every 4 Chasseurs, 1 will be a Bomber. 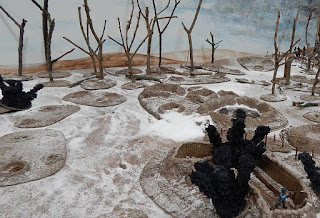 The French had two special rules for this game:

EN AVANT MES BRAVES
A French officer spending all his command initiatives to rally a group or squad may remove and additional point of shock.

‘MY POOR ROBIN, THE ORDER IS TO STAY WHERE WE ARE’
Force Morale starts at 10.  The French players always subtracts two from his roll on the Bad Things Happen table, so that French morale is harder to break during the game.

The French jump-off points are represented by each of the defended positions in the second and third lines. 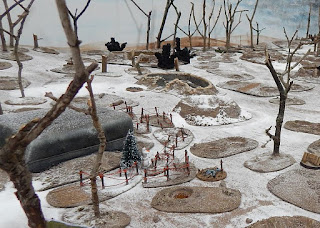 There were two German platoons. The first led by Lt Gericke (Senior Leader) with six sections (see below) he is supported by a Medium Machine Gun with 5 crew, a Flamethrower and a Sniper Team

The second German platoon was led by Lt von Friedrich (Senior Leader) with six sections (see below) he is supported by an off-table Medium Machine Gun, a Flamethrower and a Sniper Team

The German sections comprise of an NCO (Junior Leader) with rifle and D6 plus 6 infantry. For every 4 infantry one will be a bomber. 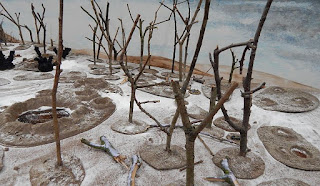 The German special rules for the scenario are:

HANDGRANATEN!
When a German leader attached to a team or squad uses 2 command initiatives, he may lead a charge against any enemy within 12” preceded by a hail of grenades.  Roll 1d6 (-1 or -2 if enemy is in soft/hard cover respectively).  Scores as follows:


Dice for the effect of the grenades, then the team or squad may move up to 3d6 into close combat.

The German jump-off points are pre-set with three placed per player. 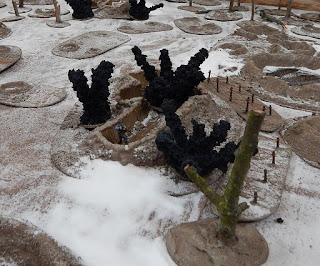 How the game played out....

James would play the French while Matt took the role of von Friedrich while Dave played Gericke.

Under the cover of the preliminary bombardment both German forces pushed on towards the second line of emplacements. Unable to man their forward positions the French deploy a Hotchkiss in the second line but accurate rifle and machine-gun fire soon have it in trouble. 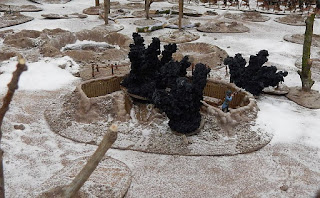 Lieutenant Robbin rushes to the aid of the Hotchkiss rallying the crew and keeping the gun in the fight before it is panicked.

With determination von Friedrich seizes the right hand emplacement of the French second line while Gericke closes in on the left hand position. Robbin rushes to rally the poor Poilu in that position but when all seems lost rushes back to get the Hotchkiss back into the fight. 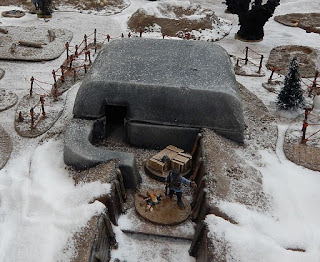 Both German players use Chain of Command dice to push up jump-off markers to their new gains and deploy reinforcements from their.

Another Hotchkiss in the French third line soon opens up on Gerickes force but they continue to apply pressure on that flank.

In the centre the German attack is stalled by the troops in the central revetment and stops completely once the Gefreiter is killed stone dead; However, with the Boshe holding the position on each flank that position is soon untenable.

The Germans consolidate their gains and then push on to the second line. Robbin redeploys the Hotchkiss to cover the threat on his right but accurate fire kills him and the troops abandon their positions in the line. 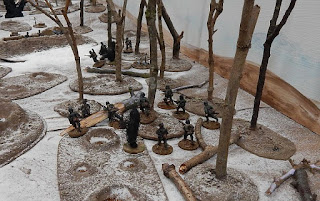 Things are looking  bad for the French and after losing two sections, the Hotchkiss, Robbin and three of their positions they are now in the end-game of their Force Morale track having only two points left.

Driant bolsters the third line of resistance but the French morale collapses as a stray bullet strikes the NCO commanding the Hotchkiss in the third line and the crew panic.

The game played really well and we had a solid five hours of action with chum James W filling in for a while while we did some shopping. Matt also provided a period feast for us, Port (in lieu of pinard), croissants, saucisses, pain, moutard and chocolat. 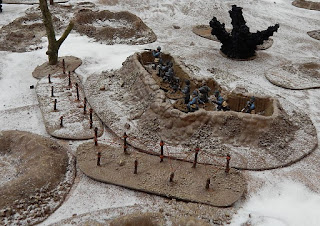 The terrain is from the collection of myself and James a lot of scratch building, but emplacements, shell holes and suchlike from Kallistra, Early War Miniatures and Amera Plastic Mouldings. The snow is from Woodland Scenics and it took about 1.5 cannisters to do this area. 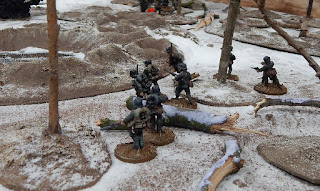 I think that all the Germans are from the Great War Miniatures range from Northstar. The majority of the French are from Woodbine by Gripping Beast, quite a few from Scarab Miniatures and a handful from Brigade Games.

The very talented James painted the 8ft of backdrop that really sets off the game.

As usual we met many old friends and made some new acquaintances. 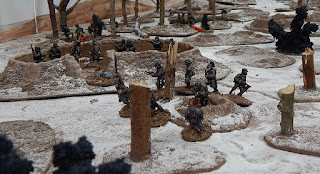 My photos really do not seem to have come out that well but Darrell got some really god ones that are on his blog.

Here are a few more of my photos. 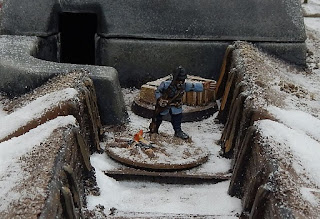 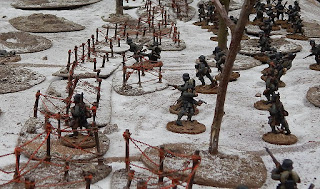 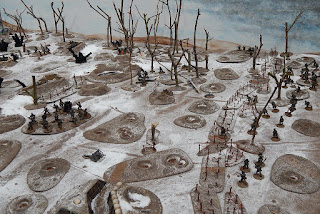 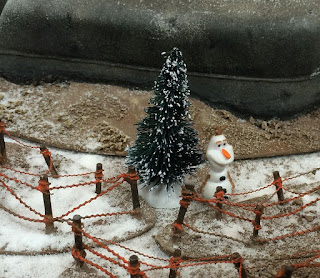 Posted by Paul Scrivens-Smith at 15:56