I've finished off the last two Confederate cavalry that I had assembled, rather a rush job, but a good excuse to show the four sections of fence that I completed this week.

These are based on the ones that I photographed during my trip to the Bull Run battlefields back in July. I'm rather pleased with the results.

They are quite a simple build, small pebbles are glued onto a strip of mount board. Then a sheet of basswood is cut into approx 3" strips and these strips roughly separated into strips. Four A-frames are created over the pebbles and then the cross planks glued in.

The base was textured with fine sand then everything was primed with brown sprat paint. The stones were picked out in browns and greys, followed by a dry-brush The planks then done in Vallejo Beige Brown with an Iraqi Sand drybrush.

The base was then completed with tufts, scatter and static grass. Quite a simple build, although I regret using the basswood, I've already had a break and suspect more shall follow. 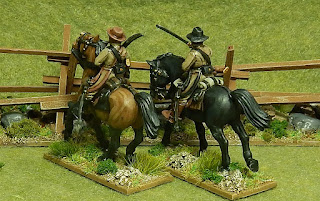 Posted by Paul Scrivens-Smith at 10:03