Taking advantage of the long Thanksgiving weekend I've made good progress on the Hundred Years War English that I started back on Agincourt day. The painting rate on these has been good and I've had a return of 42 figures in 28 days, a rate that I don't think I've maintained all year.

All figures are from the English Army 1415-1429 box and are as ever a delight to paint. Assembly can be a bit of a pain, a lot of the scabbards are really hard to remove from the sprue and the fine haft of the war-hammer has broken on a couple of occasions for me. 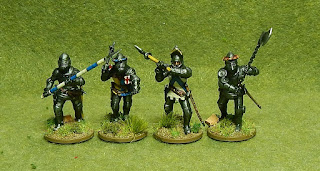 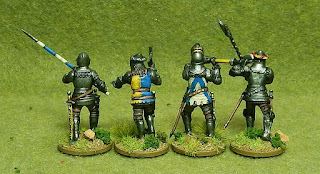 There are a nice mix of figures in Jupons allowing you to add a bit of colour to that mass of steel. I also added a few Orle on these, they seem to fit some of the helmets better than others, so a touch of trial and error. 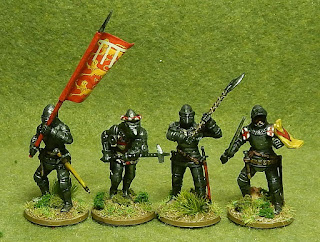 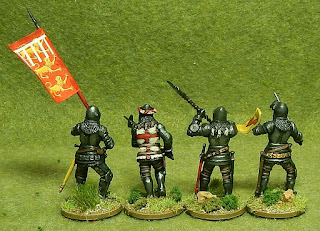 The standard bearer carries the colour of Mowbray, Earl of Nottingham that is supplied on the painting guide. The paper is a bit thick for using as a standard and may get replaced with something more dynamic at a later date. 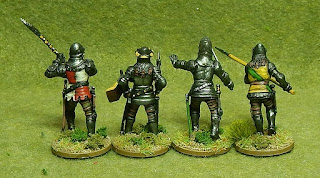 There are another dozen archers on the painting table being highlighted and another six Men at Arms to do then I'm out, here's hoping those French Men at Arms arrive from the UK soon.
Posted by Paul Scrivens-Smith at 07:47