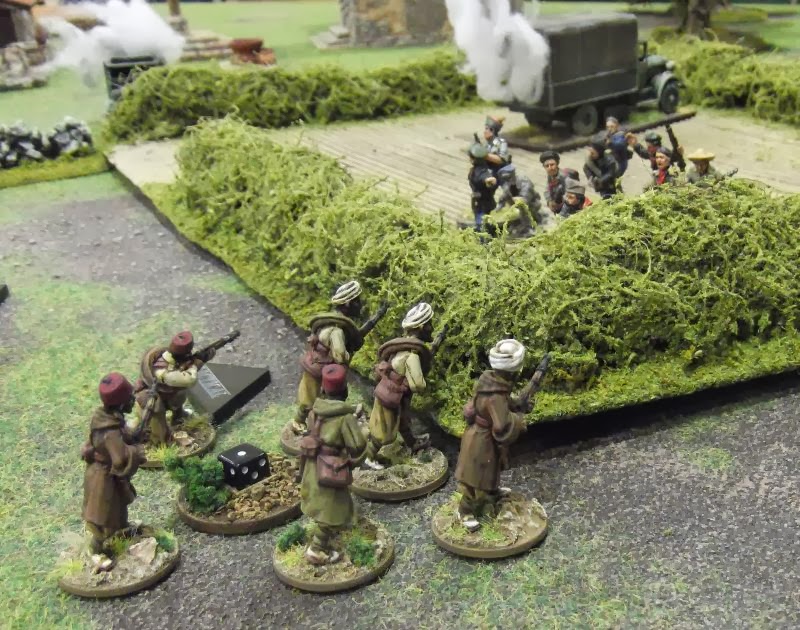 What with holidays and other commitments James and I have been itching to get together to play another game of Chain of Command in the Spanish Civil War. Especially as I had my unbloodied Moroccans to unleash on him and he was getting tired of playing the Fascists!

Yesterday evening we met at mine, Victoria furnished us with a Bangers & Mustard Mash supper and then it was over to the wargames club to give it a go.

We had not played the back three missions, so randomising it came up as 'Attack on an Objective' so we set the table up and the attackers objective would be a church tower near the defenders base edge.

Of course, I would be using my Moroccan Regulares, giving James the opportunity to use his Republican Militia. With the force difference of +14 he purchased the following supports: El Hombre (1), Two Automatic Rifles (1), Light Machine Gun (1), Hardened Milicianos (4), Guardias de Asalto Section (4), Army Officer (2), Adjutant (1),

We both rolled up a Force Morale of 10.

During patrol phase James pushed forwards from the objective and after placing his Jump Off points realised he was much too far forwards for his liking. 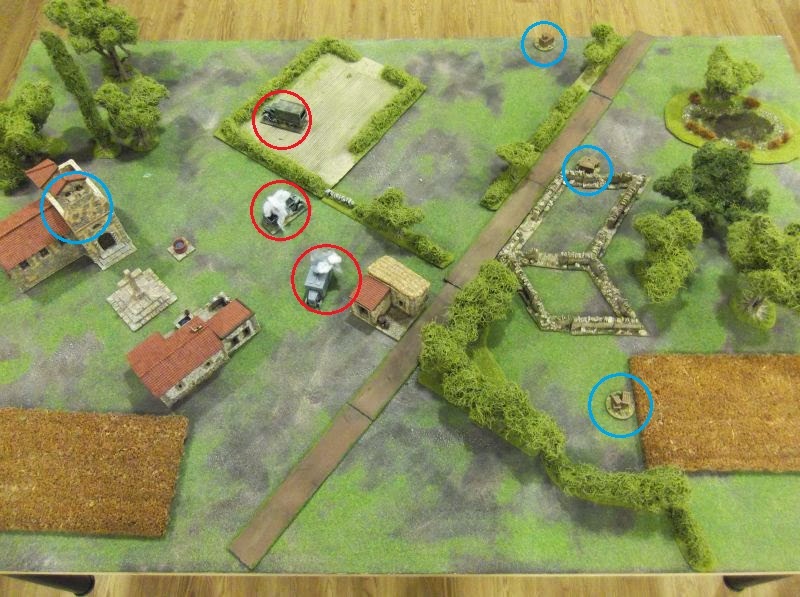 I took first phase, and in his own return phase James found out just how effective the Pre-game Barrage, right up until my second phase when I rolled three sixes - oh Phooey to Musso (in joke).

After this triple six end of turn I took another phase and was soon closing in on his vulnerable jump-off points and another double six soon followed, with only a section of Militia on the table James was starting to sweat.

To push me away, James soon initiated a combat, 6 Regulares behind a hedge faced 10 Militia rushing to defend the truck (jump off), in the ensuing bloodbath, I caused nine casualties and four shock and only took 4 casualties and one shock in return, the Milicianos were falling back in disarray.

In order to protect that jump-off James deployed his Asalto and soon a torrid firefight was underway, the Asalto had the weight of numbers, but the Moroccans had a LMG and that was soon starting to tell, although a Squad of Regulares trying to avoid being caught in the open were wiped out by a flank attack from another section of Milicianos.

With things looking dicey for his jump-off points and a visible hole on his right, James used a Chain of Command dice to move the Tiznao jump-off back into the village square.

This fire fight was to continue for most of the game, so I changed my effort to the left flank. James made use of the relocated Tiznao to deploy a section of Militia in the building before the church. Concentrated Moroccan fire soon saw the brave Militia driven off, again not without the loss of another section of Regulares who were ambushed by more militia from the Tiznao.

I was now closing in on the church with a Machine Gun squad, but the Republican T-26 was now in the fray. My Sergento Primero, trying to rally a squad in the square was first wounded by the T-26 fire and then killed by the tank.

However the Republicans were collapsing, all the Milicianos were either dead or fleeing for the safety of Barcelona and the remaining Asalto were now engaged to the front and by the Moroccan machine gun in the church tower.

By this time it was coming up to 10:30 and James was down to Force Morale 2 yo my Force Morale 6 we called it a wrap. The Regulares had carried the field!.

I was really lucky, having lost two squads and the Sergento Primer to have only lost four of my Force Morale. The Republican Army Officer advisor was terrible, almost every re-roll he did was a poor throw, although that could be much better in the next game.

We have scheduled to play again on the 20th March.

All figures are from the collection of myself and James, the terrain is all Jame's