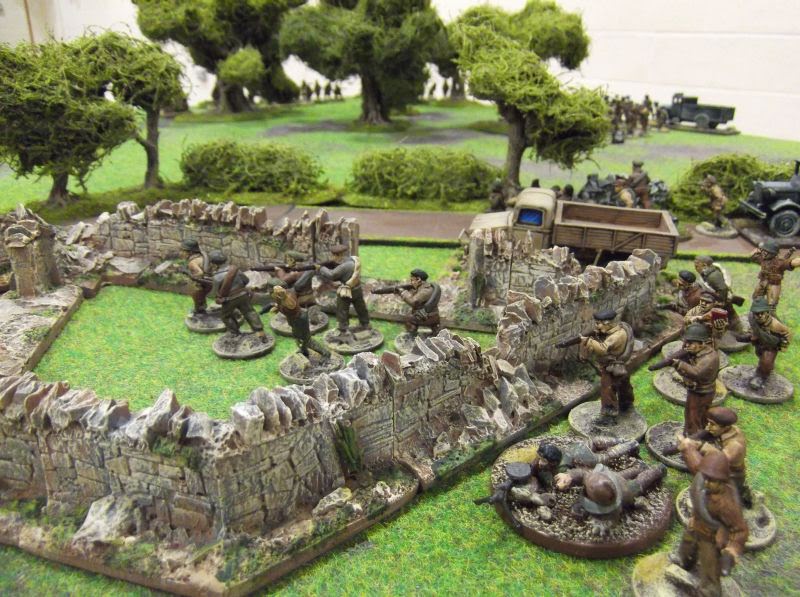 The Regulares have certainly been getting a lot of action lately. This evening, they got to fight against James using his Tom Mann Centuria from the 5th Regiment ‘Steel Companies’ list, choosing the Regular option with four Command dice.

We set up a table of fairly open terrain, with a small village on one side and a large woodland on the other. Rolling for the scenario we would be plating 'The Probe'. As James was not using his normal militia force with 'No Pasaran!' we rolled off for who would be attacker and defender, for the first time ever, I would be the defender, we were going to be thin on the ground!

I then rolled my Force Morale and threw for a paltry 8 although James was not much better on a 9. 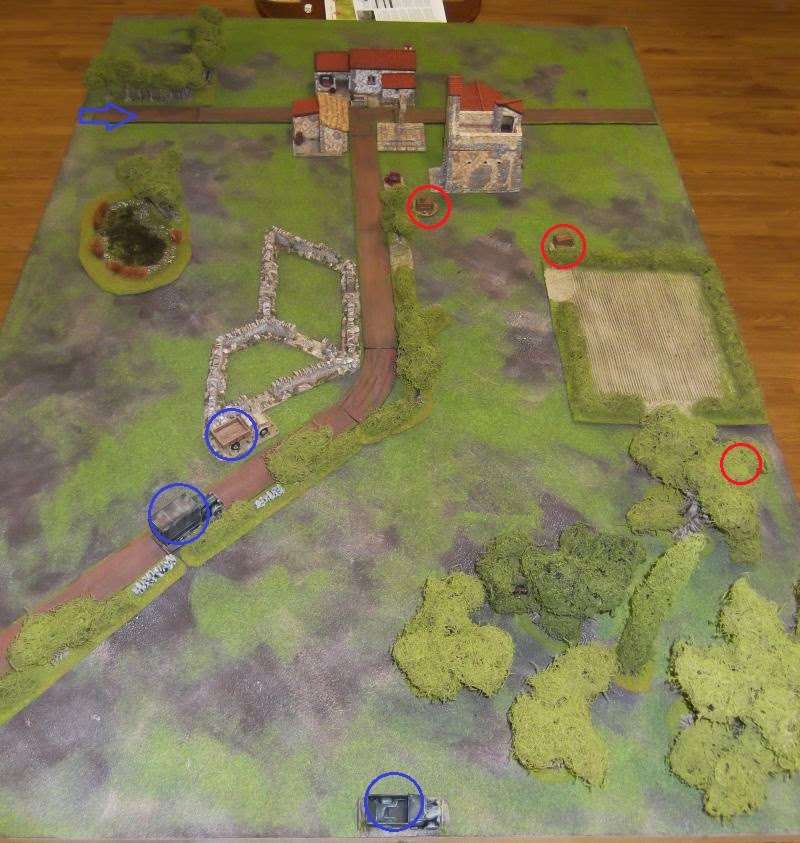 We then played out the patrol phase with James starting with four free moves and making a dash for the woodland on my left. The patrol phases ended up as per the image on the right, my Jump Off points were in red, the Republicans in blue, the Bilbao would enter where the green arrow is. As you can see from the image, I would have to use my two sections to both block the troops moving through the wood and try to stop the Bilbo just doing a dash down the road!

James rolled a 5 for mission supports, picking a Tripod-mounted Machine-gun (4) and an Adjutant (1), mindful of the risk of the Bilbao dash I picked two lots of tank hunters, one for each section.

As expected James deployed an International Brigade section to move through the wood and then deployed his MMG in the centre to cover that position. In my initial phases, I deployed one section in the wood and one section on the outskirts of the village. After my initial dash to cover the exits from the wood James tentatively moved towards me backing up the International Brigade in the woods with a section of Assault Guards.

On my right my LMG team started engaging the Republican MMG to good effect, in preparation for the 'Bilbao dash' my Tank Hunters took up positions by the roadside. To reinforce his centre and to stop me redeploying, the second International Brigade section were deployed in the centre. I also deployed the HQ runners in the church bell-tower with orders to keep watch for Republican developments.

We started to get to grips, the International Brigade troops in the woods were soon taking casualties from the concentrated fire of the Moroccans, the Asaltos moved through the wavering troops and one team launched a close assault on the team of Regulares containing the sections tank hunters, wiping the Moroccans out but leaving themselves in a bad way, the Sargento leading the Asaltos was wounded in this attack.

The Regulares fared much better in the centre, the Republican MMG was soon broken, taking their Sub-Jefe with them, I played the same dirty trick that was used on me last week and ended the turn meaning the Sub-Jefe was removed from play!

Recovering from his wounds the Asaltos Sargento was soon leading his troops into the fray again, but his path blocked by the wavering International Brigades around him he was soon wounded again. Things were going well for me in the woods.

The Bilbao arrived and started it's dash down the road, my Tank Hunters moved to launch their Petrol Can and Grenade attacks but fell far short of the mark, so the Bilbao accelerated through them. Things went better in the centre, my highly performing LMG team having seen off the MMG but now down to just two men caused great execution among one of the International teams behind a stone wall and they were soon scurrying to the rear, although  return fire from their comrades did for the two Regulares runners observing from the bell tower.

James Force Morale now started to collapse, I was still on six points but he had been reduced to four, meaning only three Command Dice. At this stage I had three consecutive phases with a jaunty double-six then triple-six. Taking advantage of this the LMG team in the wood kept up a brisk fire on the Asaltos and Internationals while the remaining rifle team kept up a bombardment of grenades and very accurate rifle fire. Almost all the Republicans in the woods were now pinned down.

With so few Command Dice and his troops dropping like flies, the Bilbao was now neglected while James went for a do or die  push in the woods.

The Asaltos Sergento rallied his remaining troops and charged into the Regulares hoping to open a crack that the Internationals could be pushed through, unfortunately, I had a surplus of Chain of Command Dice, so both shot up the assault with the rifle team, finally felling that Sergento and using a second Chain of Command Dice to move my LMG team into the attack. With the assault wiped out the Republican Force Morale collapsed to 0 and it was game over.

The concentrated attacks in the woods had got within about 6" of my table edge but were not able to make that final push.

I had been really lucky with the results of a lot of my rifle and machine-gun fire but James had made a few mistakes that cost him dear. Firstly he brought the International Brigade on in front of the Assault Guards, really he should have used the Assault Guards as assault troops to open up a gap that the International Brigade could have pushed through. He also again forgot to make his Tear Gas attacks, more shock on my defenders in the wood would have made a lot of difference.

This game is probably not as photogenic as earlier ones as most of the action took place in the heavy woodland on my right flank so we had to keep moving trees out of the way to make way for the figures.

This was probably my most emphatic victory with the Regulares so far and these chaps have not lost a game yet. But the campaign we have been planning starts in a couple of weeks, so I am sure these results will be back to bite me on the bum!