First outing for the Militia and it went very badly! 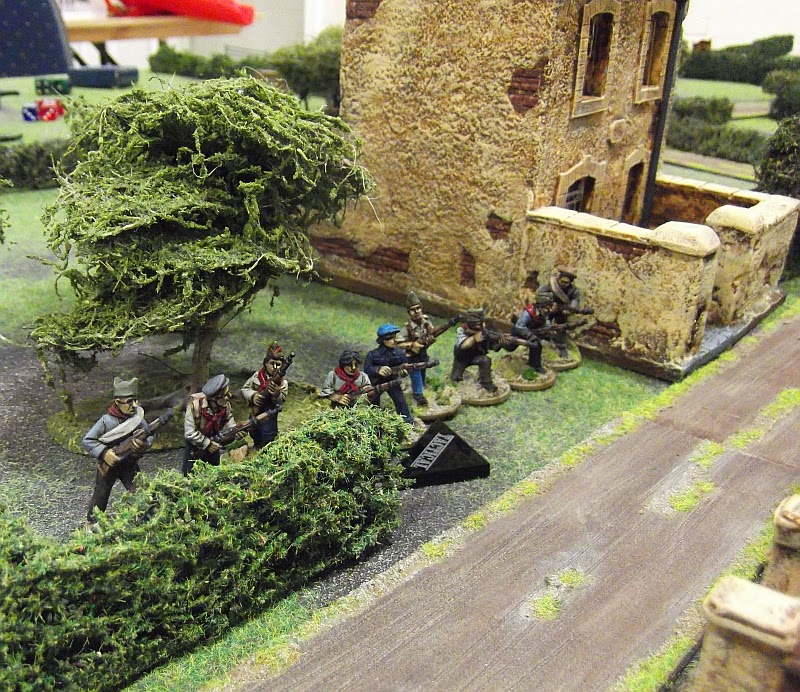 Yesterday evening I arranged to give chum Lee his first game of Chain of Command. I thought that this would also be an opportunity to field the UGT Militia I have been painting as I now have enough done to field a force.

Given the massive disparity in ratings, I thought it best that Lee used the Moroccan Regulares and I would use the UGT Militia and as he had not played before we would use play the Patrol scenario.

We then picked the additional two points of support allowed, I went for two lots of Hand Grenades, Lee took an Anti-tank team and an Adjutant.

My Force Morale was a whopping 11, Lee a more modest 9, I was going to need all the help I could get in Patrol as I lose my No Pasaran! rule so cannot choose to defend and cower behind barricades.

After we got over the Patrol Phase and had our Jump Off points laid out, I demonstrated to Lee one of the finer points of the game by Double-sixing on my very first roll of the dice! It was to be for naught though as nothing much happened apart from me deploying a section of Militia with a LMG and going on over-watch.

Soon the Regulares were taking the field and things were going badly for me, the section of Infantry I had deployed were soon shot to shiny by a newly appeared Moroccan section and within a couple of phases I was rolling on the 'Section Breaks' chart.

Rather lately, but eventually fortunately, the BA-6 appeared and was able to prop up that flank while I got embroiled in the fight around the village, with one section in a building and another section in the small orchard beside it I faced off against the Regulares across the road on the opposite side of the village. I did have weight of numbers, but being Green was taking it's toll on me. My section in the house was soon pinned so my Jefe ran in to sort them out. Only for that section to be broken too and soon running out the back door with the Jefe in tow! Having mastered the uses of the Chain of Command dice, Lee then ended the turn and my Jefe was routed from the table with that section. I had to use a Chain of Command dice myself to avoid the Senior Leader Routed test!

On my left the BA-6 armoured car was doing sterling work against the Regulares, accounting for one section and impervious to the efforts of the LMG tea to drive it off. However this was soon to end. The LMG forced a test on the BA-6 and it was compelled to engage them - while the armoured car was distracted, the Regulares Tank Hunters sneaked up and their 'Grenade and Petrol Bomb' attacks soon had the BA-6 crew routed from the table.

Things were looking shoddy for the Militia, on my right the Regulares in the village first shot up and then charged the Militia in the orchard putting paid to them. Things did not go all Lees way though, his Teniente was wounded, a Sergento dead and two sections were eliminated. I had reduced his Force Morale by this time to four, so he only had five dice I was still looking quite healthy - on six! But, I only had a single Militia section left and soon the net was closing in on them.

The inevitable eventually happened and they were also broken, I had lost every one of my troops, but still had a Force Morale of four!

I'm pretty certain that Lee enjoyed this and he's looking to finish off his Panzer Grenadiers to take on my Normandy Tommies.

I am not disheartened by this terrible loss and I need to paint a few more Militia as the support choices I took were based on what was painted rather than what I would make first choice. Playing the Militia in the Patrol scenario certainly leaves some questions though, a force that is best suited to sitting behind barricades soon takes a beating if it decides to attack.

All the figures and terrain are from my own collection with the exception of the hedges which are from the wargames club.