I've already painted up a box of the Perry Miniatures Confederate infantry as part of the challenge, so it's time to make a start on a box of their American Civil War Union Infantry in sack coats skirmishing set. 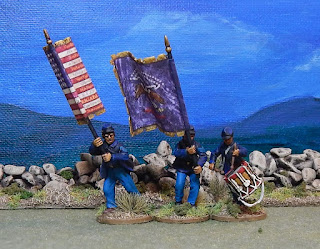 One thing that our recent Longstreet campaign has showed me is that you can probably never have enough command stands so I made a start on these first. The flags are just downloaded from Warflag and printed off at Office Depot. After sticking them on I mess up the trim of braid with a sharp scalpel then repaint it bronze, then brass, then gold. I think it gives a rather nice effect. 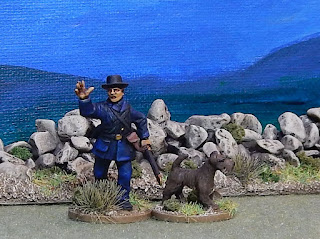 The officers terrier is of unknown providence, I think after painting it the model is supposed to be an Airedale terrier so the legs should probably be a lot lighter.

The skirmishing infantry frames make a nice selection from the mass of charging or right shoulder shift that make up the bulk of my 28mm ACW forces. The "ramming home" set of arms I really do like.

Mrs Scrivs painted me a nice backdrop for my photo-shoots in acrylics on canvas, and as well as adding to the general ambience of the picks I've convinced myself that it likely shows off the highlights on the figures better in the pictures.