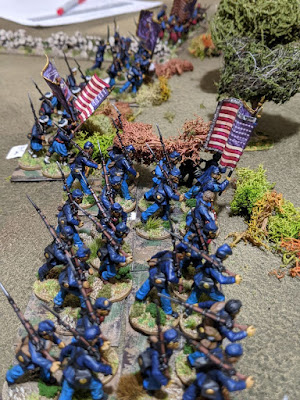 The struggle for regional dominance continues late into the campaigning season. With Pinkerton intelligence that the Confederates are preparing winter quarters south of Underwood Crossing and bolstered by fresh reinforcements Colonel Rogers decides that with the unseasonable weather there is a chance to catch Whippams men off guard.

Brigadier Gerald P. Whippam (EP:14) is a 30 year old Floridian and is already a Veteran of the Indian Wars and is accompanied by his personal Scout who's reliably provided the best ground to make a stand in earlier engagements. At the Battle of Battle of Keller's Heights Doctor Thaddeus Marle joined the force as Whippam's Personal Physician 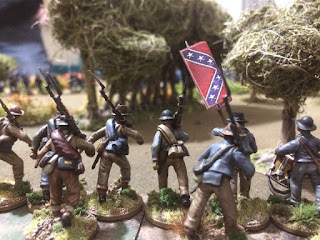 Elias Rogers (EP:4) is a 28 year old graduate of West Point and had made a career as an Artillery Officer in the United States army. He is a Leading Abolitionist and is steadfast in the cause. 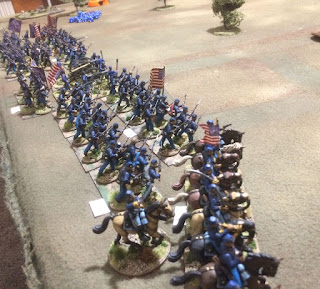 Whippam has been joined by the 21st Virginia cavalry, who on their route march to join the force ripped up the rail head in an act of Sabotage however, despite his poor performance in the field Rogers superiors have great faith in the man and dispatched a riverboat with Priority supplies.

We would play the "Clear the Treeline" scenario with the Confederates as the defender.

Whippam's scouts were able to give some warning of the Union approach so all troops apart from the 19th Texas and 4th South Carolina were able to form an initial defensive line to the north and west of the woods at Underwood crossing, the remaining troops were rushing to the join the battle line. 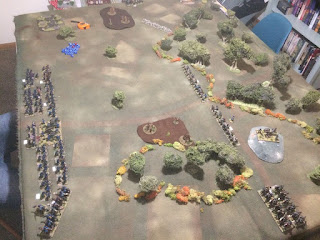 Early success went to the Union, the new 10lb rifles added to Battery B easily destroyed the remaining guns of the Texas light artillery and the Confederates were left without fire support as the Union troops marched on. Both the 8th GA and 21st VA mounted feints on the Union flanks to attempt to draw away troops attempting to overwhelm the thin Confederate centre, but the Union marched on relentless until the 2nd WI became bogged down in some unexpectedly marshy ground. 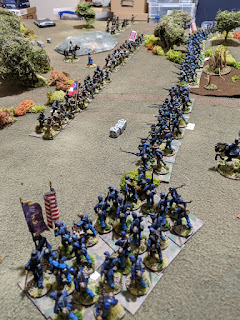 On and on came the Union troops in a relentless advance that threatened to overwhelm the thin line of Confederates, but eventually the drums of the 19th TX and 4th SC were heard in the rear, if the rest could just hold on until the the reinforcements arrived.

The Confederate horse having drawn troops from the Union centre eventually fell back to positions on each flank of the line to add their weight of fire to the defence. 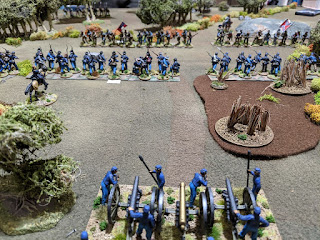 Along the line the Union troops poured fire into the 2nd FL and 8th SC and the Action cards were burnt through keeping the troops in line.

With a rousing rendition of "John Browns Body" the blue-bellies fell upon the 2nd Fl and 21st VA supporting them, in a desperate struggle along the line the Union troops were repulsed a short distance. 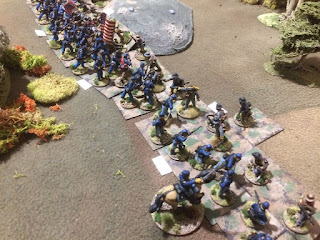 The Confederates followed up this success with a viscous counter charge. 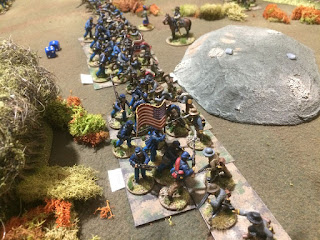 It was desperate volley fire along the lines, the Union troops with close artillery support were thinning out the Confederates, but with close losses on both it was the Union that cracked first, both armies retreated to their winter quarters to tend their wounded and regroup for the coming season.

Brigadier General Whippam was promoted to the rank of Major General for his continued successes in the cause of the Confederacy. 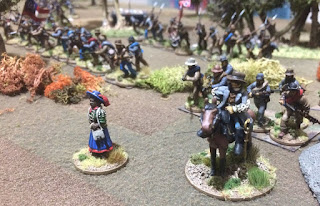 Had the Union won the charge against the 2nd FL they would have held their objective and likely won the game. 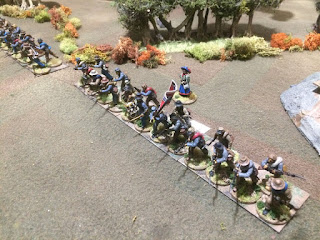