Longstreet Campaign - The Battle of King George Forest - 24th May1863 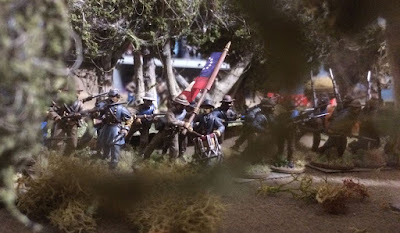 Fresh from their Winter camps the Union forces crossed the Potomac and attempted to drive a wedge between the Confederate forces and their rail heads. A party of Confederate horse staged a lightning raid on the Union supply depot but Colonel Rogers pushed on nevertheless.

Major General Gerald P. Whippam (EP:20) is a 31 year old Floridian and is already a Veteran of the Indian Wars and is accompanied by his personal Scout who's reliably provided the best ground to make a stand in earlier engagements. At the Battle of Battle of Keller's Heights Doctor Thaddeus Marle joined the force as Whippam's Personal Physician

The Confederates start the next game with an act of Sabotage.

Elias Rogers (EP:7) is a 29 year old graduate of West Point and had made a career as an Artillery Officer in the United States army. He is a Leading Abolitionist and is steadfast in the cause. The Irish Catholic Fire and Brimstone Preacher Father Seamus O'Riordan has seen fit to attach himself to Colonel Rogers staff.

We would play the standard battle scenario, Whippams scouts were unable to determine the intentions of the Union and they took the initiative for the battle and attacked Whippams divided force.

As the Union was so much stronger in artillery with five guns to my two I split my deployment leaving a void in the centre of the battlefield to allow my troops to form up behind cover and react to the Union attacks. 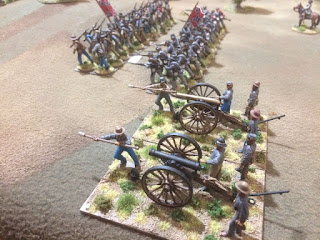 The new units to join the brigade, the 27th GA, 10th MD and Battery D Georgia light made up my left while the establish troops formed on the right behind some woodland.

I placed an objective behind the woods to be guarded by the 19th Texas who were likely too fragile to be of any use in the game.

On the my left the Union troops came on and on with the 10th MD being particularly savaged by musketry from the 15th VT and the 2nd WI, I was making a steady fighting withdrawal there in the face of insurmountable odds.

On my right the Union force had faced the guns ready for me to break out of the woods, these though were supported by some of his weaker units, the sneaky play of a Confusion card pulled the 44th MD out of line and into the range of the 4th SC whose sharpshooters exacted a terrible toll with the survivors withdrawing from the field with the colours. 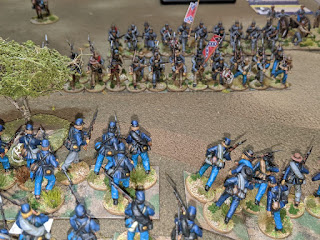 On my left the Union pushed on, and on my right I pushed on, whose weakened flank would collapse first.

The 10th MD were now down to about 150 troops on my left but held the line against the odds. On the right the Union guns crashed and my troops still pushed on and on with the 21st VA now clear of the woods and looking to turn the Union flank. 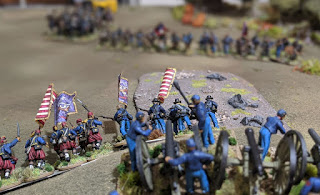 It came to a head on my left, the Union commander realising that they were about to be overwhelmed and outflanked decided that their troops should break contact and start an orderly withdrawal screened by the 26th NY, quite battered themselves the Confederates were unable to mount an effective pursuit.

The Confederates claimed a victory but neither side had really exposed their opponents. 1863 is going to be a long year so both sides can regroup and do battle again. 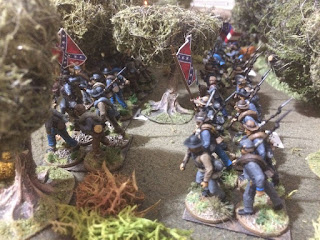 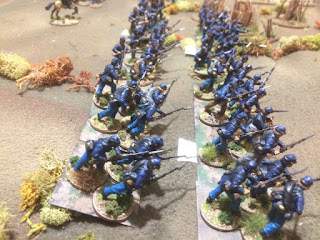 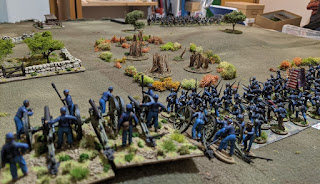 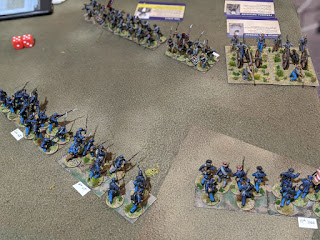