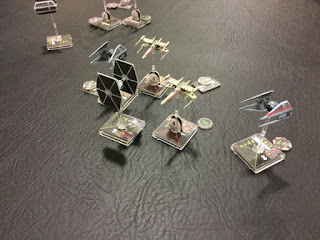 On Tuesday night at the club Ben and I played three games of X-Wing.

The first game we played the 'Mission 6: Undeniable Assets' scenario from the Lambda-class Shuttle Expansion Pack. As Ben was set up with a Tie Advanced, Tie Bomber, Tie Fighter and two Tie Interceptors this did not go well for him against my two X-Wings and two Y-Wings.

We then lined up a 100pt dogfight, I used Hans Solo in the Millennium Falcon and two X-Wings, Ben chose Tie Advanced, Tie Bomber, Tie Fighter and Tie Interceptor. Having the 'bonus focus' crew member in the Millennium Falcon made a huge impact on the game and the Rebels had cleared up in about 20 minutes or so we played it again with pretty much the same result.