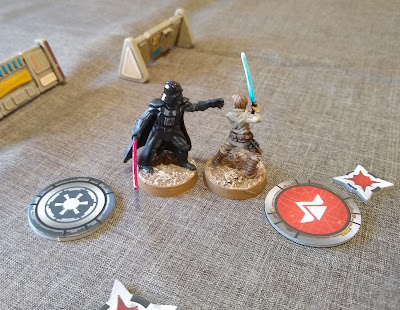 Today we were at the stage when we had (more than) enough stuff painted to play the Learning Battle from the Learn to Play guide that comes in the box set. 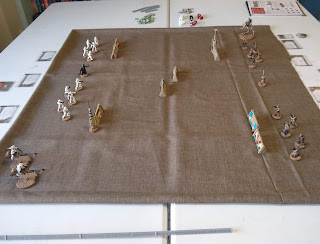 The battle was set up with the barricades as described, but we also added a couple of Vaporators that I had got painted too.

Early moves were quite cagey, both sides rushed to get into cover while the Speeder Bikes rushed up the table. 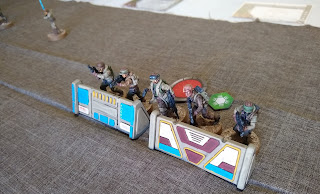 I should have been more aware of the rules for the Speeder bikes though, damned they are fast and were soon around behind me, supported by accurate blaster fire from the Stormtroopers the Speeders had soon wiped out one of my units of Rebel troopers. 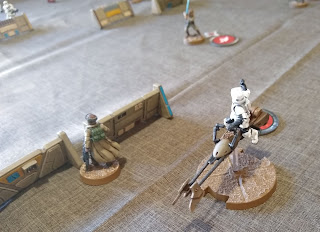 Darth Vader may be slow, but he packs a punch, he was heading up the center of the table to take on Luke who was trying to assist against the Speeder bikes, although the Rebels were pouring fire into him he was shrugging off most of the hits. Luke turned, charged into Darth and deftly finished him off. 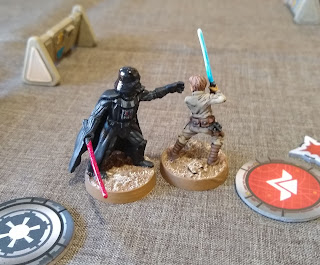 With his second activation, Luke continued into a unit of Stormtroopers behind, killing three of their number. The Stormtroopers disengaged, stepping back, they opened a fire lane for their colleagues who gunned Luke down.

By this time the remaining Speeder bike was destroyed and a desultory last couple of turns passed with the game finishing with four Rebels plus an AT-RT on the table against seven Stormtroopers. 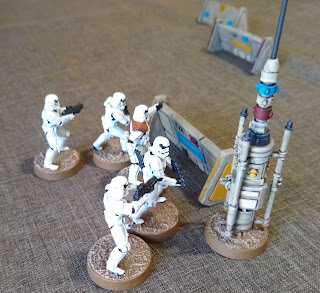 Both sides had achieved a couple of units destroyed and adding up the points it was a minor victory to the Rebels.

We will certainly be playing some more. 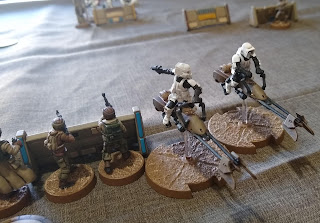 Posted by Paul Scrivens-Smith at 19:05