First crack at Chain of Command in the Western Desert

Quint has been itching to use the new AfrikaKorps that he recently had me paint for him in a game of Chain of Command and we took that opportunity yesterday evening when we played out the Delaying Action scenario.

We threw some terrain on the table and got down to it, the Germans would be defending the end with the small oasis.

We decided that as I had so many more troops to choose supports from than him that I would be the attacker. Rolling for Force Morale my Indians came up an 11 and the AfrikaKorps a rather shaky 8! 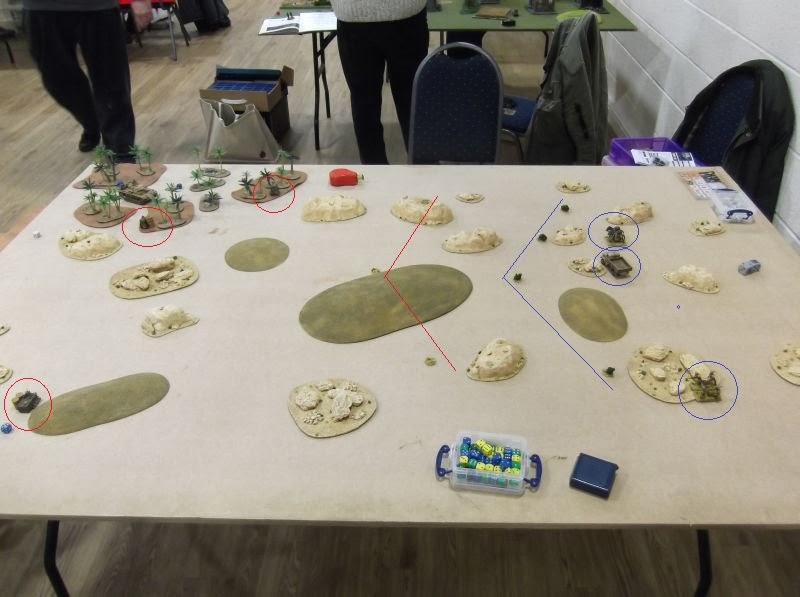 As we were both using platoons rated at the same level, we would only have the mission supports. I rolled a nine and chose: Matilda II, Preliminary Bombardment, Adjutant and a Medical Orderly. Quint spent his four points on a PzIIIG.

The Patrol Phase played out as follows with the German Patrol Markers and Jump-Off points marked in Red and the Indians ones in Blue.


I could see that the German Jump Off point at the bottom left of the image seemed the most vulnerable so decided to make that my primary objective. 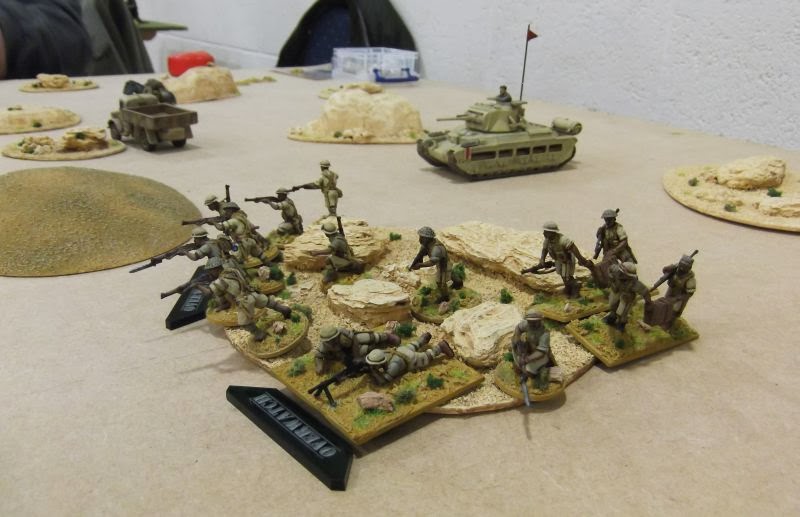 The Prelimiary Bombardment worked wonders, keeping the Panzer III of the table for a couple of phases and the German CO for many, many phases - we joked that the explosion had trapped him in the latrine!.


The British kicked off by bringing the Matilda into play and a couple of sections of infantry to challenge for that objective. After a shaky start the PzIII made an appearance and started to move up to support the Grenadiers while the British pushed on with their advance. 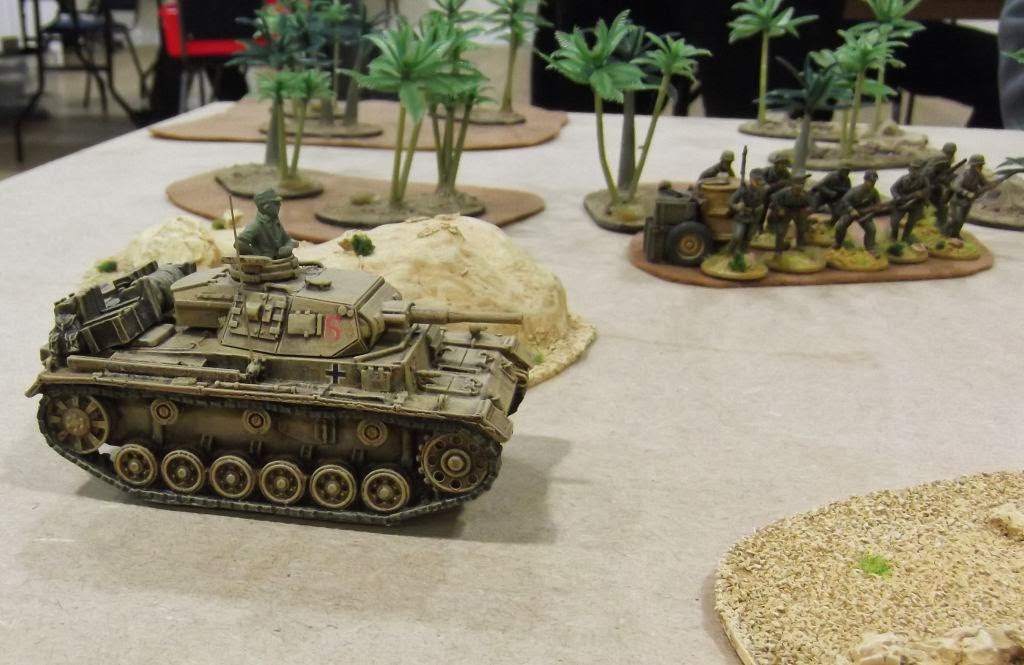 One of my sections dropped off it's Bren team while the rifle team moved in support of the Matilda II while the second section followed up in support. The Germans then deployed a section on the objective that I was targeting, but as you can see from the starting points, that is very isolated  and I did not want to have them reinforced, so I deployed another section on my right and started working my way towards them.

The Germans on my left opened up and both felled the deployed Bren team and hit a Junior Leader, fortunately my Force Morale was only reduced by a single point! Retribution was swift though the Matilda II started pouring fire into them along with concentrated Bren and Rifle fire, the shock was soon mounting up. 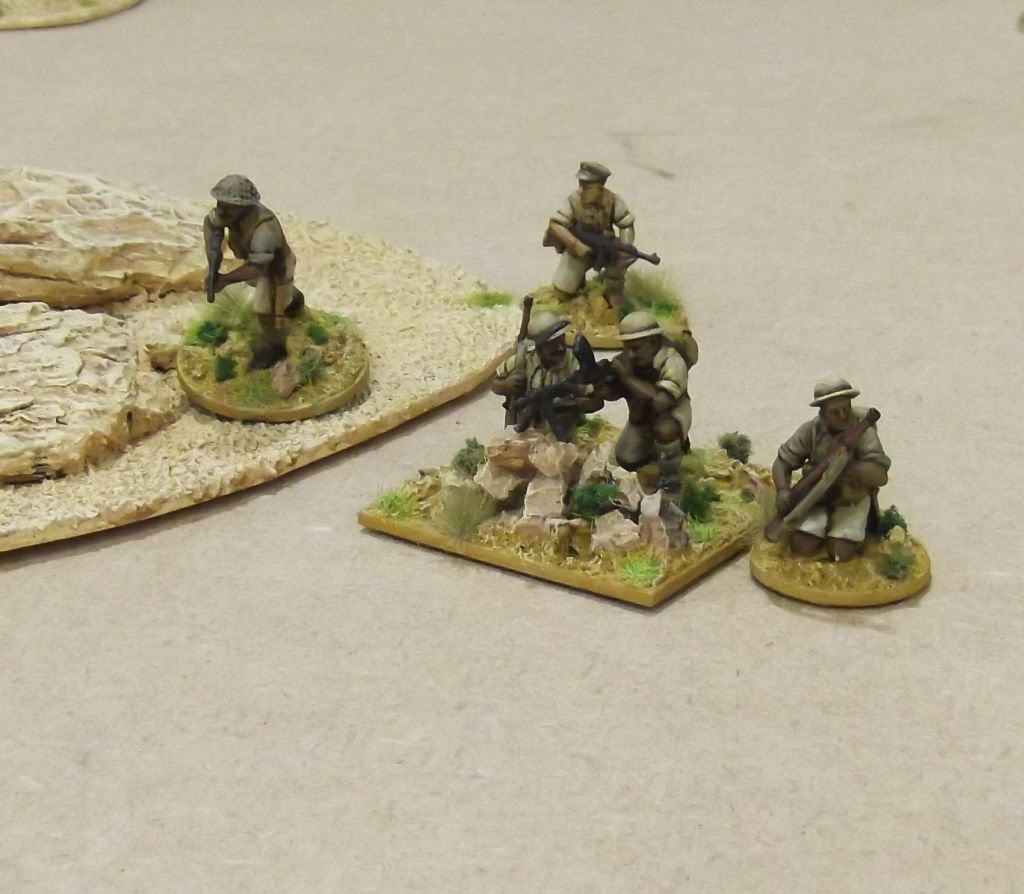 In order to try to prevent this the Panzer III opened up on the Matilda II, but the first three shots were wildly inaccurate and a fourth one was unable to penetrate the armour. Unperturbed by this the Matilda returned fire the first two shots rattled the gunner badly while a third shot penetrated the hull killing the driver! With four shock points on them the Panzer III was abandoned by it's remaining crew who fled to the rear.
It did not all go my way though. The German Anti-tank rifle did what the Panzer III could not do and scored a 'equal hits and saves' hit on the Matilda II putting on a point of shock and driving it slightly backwards!
Things were now looking very shaky for the Germans defending my objective so they elected to use a Chain of Command dice to move the Jump Off Point to a more central location. The section defending it's previous area then broke off and started to retire but was caught in viscous machine-gun and rifle fire.

The Indians pressed on their attack, moving around the abandoned Panzer and towards the new location of that Jump Off Point.
By now my Force Morale had been reduced to eight and Quinton was at a rather shaky four, it was getting quite late and really time to wrap up so Quint suggested that he would have to withdraw soon as he was close to the point where his troops would be unable to offer much more resistance.

Another excellent game of Chain of Command. I'd suggest that you give it a try if you already haven't.

Here are a few more images from the game. I painted both the Indians and AfrikaKorps infantry along with the British vehicles, Quint painted the DAK vehicles. 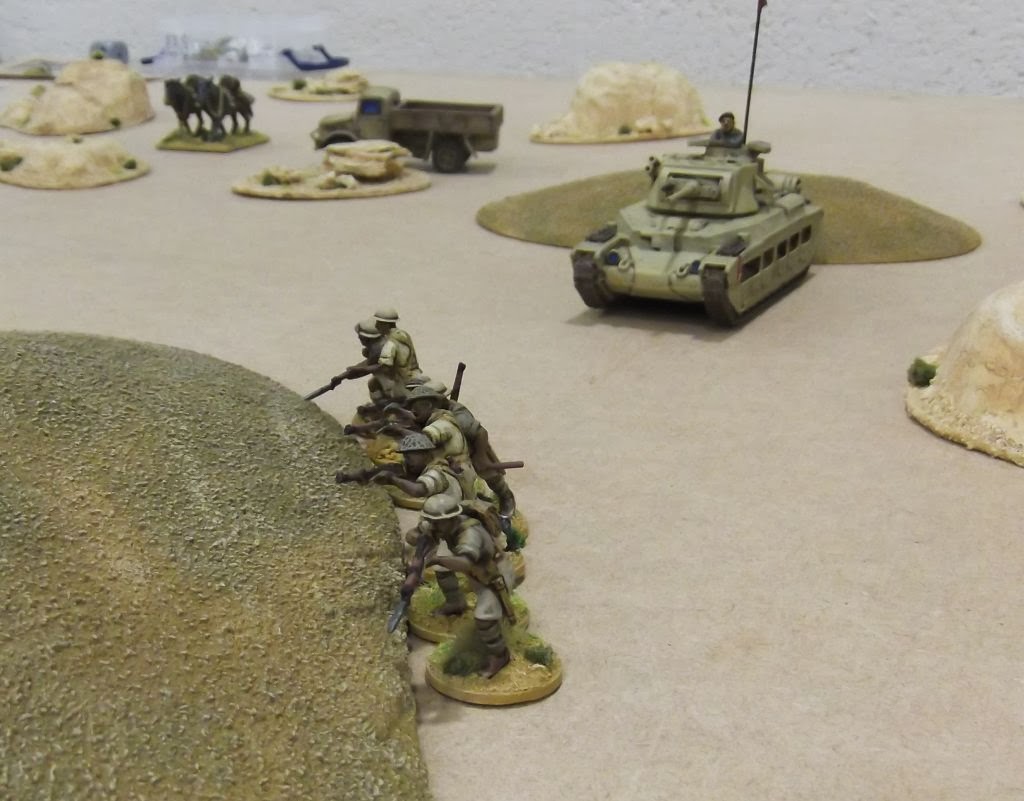 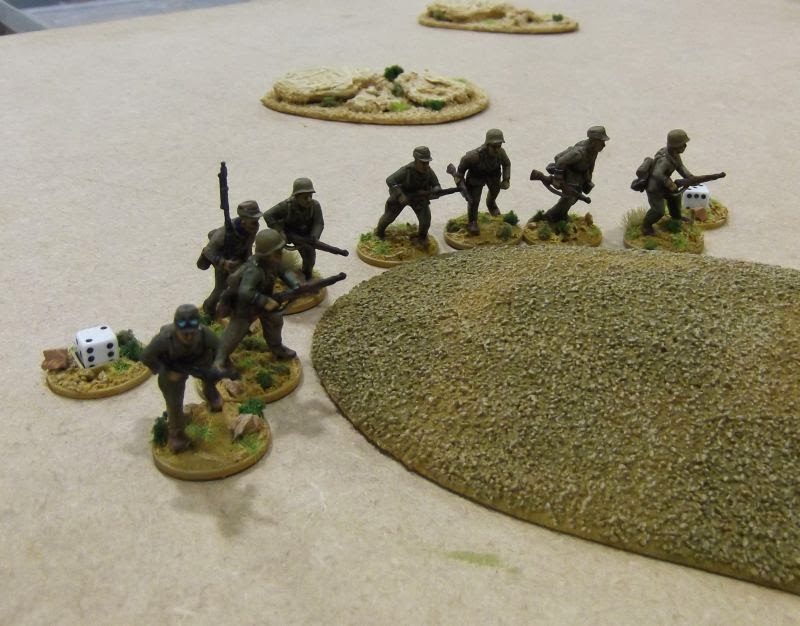 Posted by Paul Scrivens-Smith at 06:32